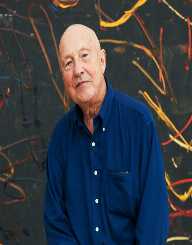 German painter, printmaker, and sculptor, Georg Baselitz was born on January 23, 1938, in Deutschbaselitz, Saxony, Germany as Hans-Georg Kern. The place of his birth is now known as a part of Kamenz, Saxony. It was later included in communist East Germany before the unification of Germany. He hailed from a very modest background, his father being an elementary school teacher. He lived in the local school building in Kamenz along with his family. The school building also served as a garrison for soldiers participating in World War II.

Later, the building got demolished during the frontline clashes between the Axis and Allied (Russian) forces. The Baselitz family had to take shelter in the underground cellars beneath the school building after the demolition.

Having attended a local school in Kamenz, Georg Baselitz studied art at the Academy of Fine and Applied Art in East Berlin. Beginning in 1956, he studied there for two semesters. The institute expelled him from the institute after two semesters as he failed to follow the communist ideology of the then East Germany. In 1957, he moved to West Berlin and enrolled at the Academy of Fine Arts there. Resuming his study of art at the Academy, he completed his post-graduation in 1962.

Georg Baselitz replaced his surname with Baselitz during the period of his study. While studying in East Berlin, he studied the officially sanctioned concept of social realism under the communist dispensation. He had to explore abstract art after relocating to West Berlin. However, his focus was to revive the traditional German Expressionism, which, Nazi Germany had denounced during their reign.

Georg Baselitz grew up witnessing the sufferings inflicted upon the people by the massive destruction caused by World War II. As a result, the concept of destruction became synonymous with all his works. In his initial works, he emphasized upon figurative painting, where the human figure is the central focal point.

From 1960 onwards, he also showed raw emotion by intentionally adopting a rather crude style of expressionism. He came up with his first original work in the early 1960s with a uniquely distinct style of paintings. The Rayski-Head painting series and the painting G.Head are ample testimony to such effects.

A controversy erupted in 1963 during the first solo exhibition of Georg Baselitz' paintings at a gallery in West Berlin. A public prosecutor confiscated two of his paintings viz., ‘The Big Night Down The Drain’ (1962-63) and ‘The Naked Man’ (1962) on accusations of being lewd and obscene. The resultant court case dragged on until 1965.

In 1964, Georg Baselitz reproduced his first etchings in a printing shop in Schloss Wolfsburg. He later exhibited it and announced the inauguration of a new medium called ‘printmaking.’ It is a process of creating artworks by printing and is a powerful medium. The new medium remained an integral part of his artistic repository.

In 1965, Georg Baselitz went to Florence, Italy, to study on a six-month scholarship. He studied Mannerist graphics at the Villa Romana. Upon his return to West Berlin, he turned his attention towards heroes, shepherds, and rebels, making them the subject of his paintings. He created the series of heroes between 1965 and 1966. The most prominent painting of this series, the large format composition ‘The Great Friends’ is on display at the Ludwig Museum of Cologne, Germany.

In 1969, Georg Baselitz began painting displaying the subjects upside down. This is a unique way of his style of protest, where he highlighted an organization of colors and form rather than the subject matter. By such an unconventional style, he tried to project his experience of the post World War II violence he had witnessed so closely during his formative years. One such prominent painting is the landscape of the Saxony countryside featuring inverted yellow birds.

Georg Baselitz met his future wife, Johanna Elke Kretzschmar during his study in West Berlin. They tied the nuptial knot in 1962. The couple is proud parents of two sons, Daniel Blau and Anton Kern, both of whom are gallerists. Baselitz moved to Salzburg in Austria in 2013 along with his wife. Both of them embraced Austrian nationality in 2015 and have been living in Salzburg since 2013.

Baselitz is mostly regarded as the pioneer of Neo-Expressionism as a form of painting.