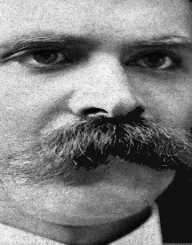 Friedrich Nietzsche is a native of Saxony and was born in the German province in the town of Röcken. He was born on 15th October in the year 1844 to a Lutheran pastor, Carl Ludwig Nietzsche, who was also a former teacher.

His mother was named Franziska Oehler, and Friedrich had two other siblings. His brother was Ludwig Joseph, and his sister was Elisabeth Förster-Nietzsche. He lost his father when he was five years old in 1849 to a brain ailment. His younger brother also died within the next year.

Friedrich moved with his family to live at his grandmother’s after the loss of his brother. This was however short-lived as he had to move away when his grandmother died in 1856. The family moved back to their own home after that.

His primary education was at an all-boys school before moving on to further education in a private school. He met Wilhelm Pinder and Gustav Krug in his new school along with Rudolf Wagner.He was in Schulpforta for a boarding school in the years from 1858 up till 1864. It was here that he got exposure to Roman literature as well as the entrancing world of Greek mythology.

Friedrich Nietzsche was recruited by the University of Basel in 1869 for the professorship in classical philology. He was aged 24 at this time and became the youngest holder of the chair at Basel. During his stay in Switzerland, he authored the books “The Birth of Tragedy” in the year 1872 and 1878, the second one “Human, All Too Human” hit the stands.

He became a researcher into the values that underlie modern civilization while in Switzerland and moved away from the doctrines of Schopenhauer. This was also his moment of departure from classical literature. He left Basel when he suffered a nervous ailment in the year 1879.

He moved between France and Switzerland and Italy for the next decade. He was mostly a recluse and would stay with his mother whenever he was in Naumburg. This period of reclusiveness aided his literary bent, and he was prolific in this decade. As to his religion, he was regarded as an atheist.

Friedrich Nietzsche was the author of “Thus Spoke Zarathustra,” which came out in four volumes in the two years t0 1885. By 1886, he authored “Beyond Good and Evil” and followed up in the next year with “The Genealogy of Morals” in 1889, his book, “Twilight of the Idols” was published.

It was his espousing of his anti-Christian views that led to his declaration and the famous statement "God is dead,"! He rallied for self-perfection and endorsed such views for the creative drive. He espoused being a “super-man” as much as the “over-man” or (Übermensch). This is an individual that has a worldview that overrides the planks of the “master and slave” or the “good and evil.”

Friedrich Nietzsche has remained as a controversial thinker and philosopher all through history although part of his efforts became a foundation for other scholars. The personality traits and development elements that he espoused became the basis for several theories that have emerged in the modern-day personality development school of thought.

The works he made famous included “Thus Spoke Zarathustra,” which also became a handbook for German soldiers during the First World War. Other leaders of renown like Mussolini, Richard Nixon, Theodore Roosevelt and Charles De Gaulle, were all reputed to have been influenced by his work.

Thus Spoke Zarathustra was one of his most reviewed books and has attained a place of repute over the centuries. “The Gay Science” was another headlines hugger by Friedrich and was published in its first part in the year 1882.

Albert Camus, Leo Strauss as well as Jean-Paul Sartre, are among a few that were impacted by the works of Friedrich Nietzsche. Michel Foucault Gilles Deleuze and Jacques Derrida have also paid homage to this great thinker in their works.

He is considered to have impacted Sigmund Freud as well as Carl Jung in their psychiatry scholarship. His ideas covered such themes as morality, individuality as well as finding meaning to existence. He hugely impacted the major thinkers of the 20th century and his protégés cut across art, theology, and philosophy.

Friedrich Nietzsche is known to have suffered a mental collapse while in Italy in the year 1889. This unfortunate scenario happened in the city of Turin and marked the downturn in the life of this eclectic mind.

The insanity bouts are not explainable, and there is no documentation as to the likely reasons. Some historians have only mentioned possible syphilis infection, drug overdose or a genetic trait.

Friedrich Nietzsche is known to have met Lou Andreas Salomé in 1882, and both of them spent time together in that season. Lou was referred to as his lover, and in summer of that year, they were holed up in Tautenburg in the province of Thuringia.

However, the Lou Andreas Salomé affair is recorded to have ceased in the winter of 1883, after Friedrich’s sister intervened. Lou is regarded as having a famous name for getting recorded in history as failing to marry Friedrich Nietzsche.