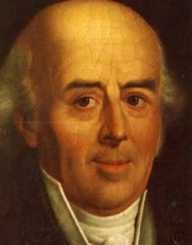 Christian Friedrich Samuel Hahnemann was born 10th April 1755, to Christian and Johanna Hahnemann. He was born in Meissen, Saxony and had two siblings. Samuel Hahnemann did well at school and became proficient in various languages. He wanted to study medicine, which he did for two years at the University of Leipzig. It proved a challenge as his family background was very modest, but he was able to work as a translator and teacher of languages to pay his way through medical studies.

After two years of study at Leipzig, Samuel Hahnemann moved to Vienna to continue his medical studies for a further ten months. Although finances continued to be an issue, Hahnemann graduated from the Erlangen University in 1779 with his Master's Degree.

In 1781, Samuel Hahnemann became the village doctor in Mansfeld, Saxony. He soon stopped practicing medicine, as he was very unhappy with the state of the profession and some of the treatments that were prescribed. Bloodletting, in particular, was one such treatment that he objected to. He believed that much of what he had learned was more harmful than helpful to his patients. Samuel Hahnemann left his practice in 1784. He concentrated on chemistry, as well as writing and translating scientific and medical textbooks. During this period, he was also determined to research what he perceived as alleged errors in medical treatments. During his translation work, Samuel Hahnemann came across a claim by William Cullen, that cinchona, which is the bark of a Peruvian tree, was effective for treating malaria due to its astringency. Hahnemann tested himself with the cinchona to see what the outcome would be, and he came down with symptoms similar to those of malaria.

Samuel Hahnemann put forward the hypothesis, namely, that a substance that caused a set of symptoms in a healthy person could also treat a sick person who was showing similar symptoms. The principle “like cures like” was the basis for his approach to medicine, and he called it homeopathy. Samuel Hahnemann followed on from work produced by Anton von Storck, a Viennese physician. Hahnemann drew the same conclusions as von Storck. He went on to create a method of dilution so the drugs being administered would deliver a less toxic effect on the patient. It was around 1800 when his experiments became systematic in relation to dose reduction. He began to treat other ailments using his theory.

Samuel Hahnemann published various essays on his homeopathic approach to medicine. In 1810, he published The Organon of the Healing Art. This was the work that gave the detailed methodology of his work, along with guidelines on how to use and administer for practitioners. There were several revised editions published, including the last revision found after his death, and not published until 1921.

In 1811, Samuel Hahnemann returned to Leipzig with his family. He wanted to teach his medicinal approach at the University of Leipzig. He underwent the process required to become a member of the faculty and received a professorship. He moved to Paris in 1835 and lived there until his death in 1843.

Samuel Hahnemann continued to practice and build on his research of homeopathy for the remainder of his life. He published several books and essays on homeopathy, chemistry, and medicine. These included a six-volume set called Doctrine of Pure Medicine (1811-1821), and a five-volume set called Chronic Diseases (1828).

In 1782, Samuel Hahnemann married Johanna Henriette Kuchler. The couple had 11 children. The couple was happy and remained together until Johanna’s death in 1830.

His second marriage was to Marie Melanie d’Hervilly in 1835.

There is an educational hospital in Philadelphia which was established in 1885. It is called The Hahnemann University Hospital in his honor.

Samuel Hahnemann’s main legacy, though, was the introduction of homeopathy. This complementary modality is practiced widely through the modern-day world and is now second-nature to many when they are looking for a healing tool for ailments.