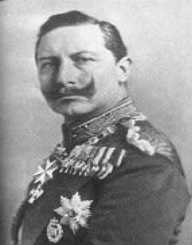 Wilhelm II was the last monarch of Germany and Prussia; he was the last Kaiser and King of Prussia who ignited World War 1.

Wilhelm II was born on 27 January 1859; his full name was Friedrich Wilhelm Viktor Albert of Prussia. He was born in Kronprinzenpalais in Potsdam, Germany. His parents were Prince Frederick William of Prussia and his Crown Princess Victoria, who was the eldest daughter of England's Queen Victoria. Crown Princess Victoria had six more children after, but only five survived infancy.

Wilhelm II was born with Erb’s Palsy, due to difficult breech birth. His left arm was six inches shorter than his right arm, which he had learned to hide. Wilhelm was a descendant of the Royal house of Hohenzollern.

Wilhelm II started education at the age of six, had a private tutor named Georg Hinzpeter until he enrolled in Friedrichsgymnasium in Kassel. He graduated in 1877 and moved onto University of Bonn. Wilhelm majored in law and politics. Wilhelm II was heavily influenced by Chancellor Otto Von Bismarck, who planned to use Wilhelm II as a way to maintain his political dominance against his parents. Despite his parent’s attempt to teach liberalism and democracy, Wilhelm II supported the autocratic rule, creating a rift in the relationship.

When he reached twenty- one year of age, Emperor Wilhelm I assigned the grandson to began a military education, by starting off as lieutenant to the First Regiment of Foot Guards. Wilhelm II was based in Potsdam. In 1884, Wilhelm II began representing Germany on diplomatic missions. Two years later, his education in Foreign Ministry began

Kaiser Wilhelm II was a Lutheran member of the Evangelical State Church of Prussia's older Provinces, as its King. Wilhelm II also frequently voiced anti-semitic views, as he thought that Jews opposed his rule.

After Princess Elisabeth of Hesse-Darmstadt rejected him, Wilhelm II married Princess Augusta Victoria of Schleswig-Holstein-Sonderburg-Augustenburg in 1881. Augusta gave Wilhelm six sons and a daughter, before dying in 1921, due to declining of health issues. Nine months after the death of Empress Augusta Victoria, sixty-three-year-old Wilhelm II married widowed Princess Hermine Reuss (Elder Line) of Greiz, who was thirty- four years old, in 1922. She and her son were invited to Huis Doorn, where the Emperor stayed during his exile. They had no children together.

On 15 June 1888, 29- year old Wilhelm succeeded his father, Emperor as Frederick III, after he died of throat cancer, after ninety- nine days of ruling as Kaiser and King of Prussia. Wilhelm II modernized Prussian educational system, and put modern medical practice as first in Germany. Two years into Kaiser Wilhelm II’s reign, he clashed with more his chancellor. In 1890, following Kaiser Wilhelm II’s rejection of his foreign policies that aimed at keeping peace with France and Russia, Otto Von Bismarck resigned at the age of seventy-five. Leo von Caprivi replaced him. Four years later he was replaced by Chlodwig Prince of Hohenlohe-Schillingsfürst. Bernhard von Bülow took the job in 1900. After Otto, the Kaiser had taken over domestic and foreign policies.

Kaiser Wilhelm II had managed to enrage many countries with his interviews, speeches and inappropriate behavior. The boiling point was after the assassination of Archduke Franz Ferdinand in 1914. The friend of Kaiser was assassinated in Sarajevo, Serbia. The Emperor offered support to Austria- Hungary in rooting out the Black Hands, and armies if the countries went to war. Unfortunately, Austria had declared war against Serbia, and the Russians moved to defend Serbia against the attack. The situation quickly turned into World War I. During the war; his power decreased as he handed more awards and duties to others. Their plan to attack the weaker force: France had failed, but he continued. In 1916, the German Empire had become a military dictatorship, under the control of Field Marshal Paul von Hindenburg, a supporter of the Kaiser, and General Erich Ludendorff.

In late 1918, Kaiser Wilhelm II was taken by surprise when multiple centers in Berlin had an uprising. The mutiny included his Kaiserliche Marine, the imperial navy. The outbreak of German Revolution forced him to abdicate both titles on November 9, 1918. Following his abdication, Friedrich Ebert, leader of the Social Democratic Party of Germany took charge. The same day, Germany was declared a republic. Wilhelm II was exiled to Amerongen, the Netherlands the next day. He avoided prosecution after King George V and President of the United State’s Woodrow Wilson’s view that it will destabilize international order.

Wilhelm II issued a belated statement of abdication on 28 of November, to formally end Prussia’s four-hundred-year-old monarchies. He bought a house in Doorn and lived there since 1920. At the age of 82, Wilhelm II passed away due to pulmonary embolus on June 4, 1941. Wilhelm II died in his home in Doorn and was given a military funeral by Adolf Hitler. Wilhelm II was buried in a mausoleum in Huis Doorn, as he had wished never to return to Germany until the monarchy was restored.