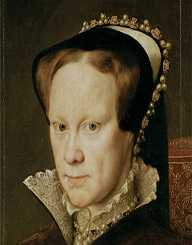 Mary I also called Mary Tudor was the Queen of England and Ireland, who ruled from 1553 until her death in 1958. Born on February 18, 1516, she was the first woman to ascend the throne of England. Mary, I became known as Bloody Mary for her hostilities and persecutions of Protestants in her bid to restore Roman Catholicism in England. During the Marian persecution, Mary oversaw the burning of over 280 religious dissenters.

Mary was born to King Henry VIII and Spanish princess Catherine of Aragon to on February 18, 1516. Born at the Palace of Placentia in Greenwich, England, she was the only surviving child of her mother. Her mother witnessed several miscarriages and about four stillborn before her birth. Three days after her birth, she received baptism into the Roman Catholic faith at the Church of the Observant Friars in Greenwich.

An intelligent child, Mary received early education from his mother. She could read and write Spanish at the age of nine. Subsequently, she studied Spanish, French, and dance. Mary had stepsiblings from his father’s marriage to Anne Boleyn in 1533. Following Henry’s second marriage, Archbishop of Canterbury, Thomas Cranmer, annulled his marriage to Mary’s mother.

As a result of her parent’s divorce, Mary was deemed illegitimate to ascend the throne of England. Mary, therefore, became The Lady Mary instead of Princess Mary. She was also stripped off all of her royal benefits. Henry VIII unsuccessfully also forced her to convert from Roman Catholicism. Despite several attempts to press her, Mary never accepted the illegitimacy claims.

Her half-sister, Elizabeth in 1533, ascended the Princes title. Just like Mary, Elizabeth was also declared illegitimate after her mother was beheaded in 1536.

Henry’s third marriage was to Jane Seymour who gave birth to Henry’s successor Edward (later Edward VI of England). Mary became the Edwar’s godmother. In the Act of Succession 1544, King Henry VIII reinstated Mary and Elizabeth to the line of succession after Edward. However, the two remained illegitimate.

Henry VIII started looking for possible suitors for Mary at her very young age. At the age of two, Henry betrothed her to Francis III, Duke of Britany, the son of King Francis I of France. However, it ended three years later. When she was six years, she was paired to her cousin, 22-year old Holy Roman Emperor Charles V. Just like others, the engagement later broke. Subsequently, a marriage treaty was signed between France and England. According to it, Marry could marry either King Francis I or his son Henry, Duke of Orleans. Several other pairings failed including that of her cousin Charles V (Charles I of Spain).

Following the death of Henry in 1547, his son Edward succeeded him as King Edward VI. He was nine years at the time. Edward continued his father’s religious reforms, strengthening the Church of England and introducing English for church services instead of Latin. However, Mary defiantly continued to celebrate mass, despite the consequences.

After the death of Edward in 1553, Lady Jane Grey, backed by some politicians, seized the throne. Edward fearing Mary would restore Catholicism to England had disinherited her and Elizabeth who was a protestant. He had to include Elizabeth because disinherited Mary alone would raise questions. Edward then made Lady Jane his successor.

Consequently, Mary fled to Norfolk after the death of Edward. There, she gained the support of many and raised an army. On July 19, her forces overthrew Jane. Mary returned to London on August 3, 1553, in the company of her half-sister Elizabeth.

In her quest to restore Catholicism in England, Mary decided to marry Philip II of Spain, despite strong opposition. Philip was 11 years her junior. Mary attracted several enemies for the decisions and even became at odds with parliament. That notwithstanding, she went on with the marriage.

Following her marriage to Philip, she restored the Catholic creed made changes in laws against heresy. This gave rise to Protestant insurgence, and Mary dealt ruthlessly with such dissidents. She oversaw the killing of several Protestant with about 300 burned at stake. Mary since became known as Bloody Mary.

In dire need of a child to succeed her, Mary faked some pregnancies. She never had a child and later became depressed and ill. Mary died on November 17, 1558, at St James’s Palace, aged 42. She was buried in Westminster Abbey. Elizabeth succeeded her.