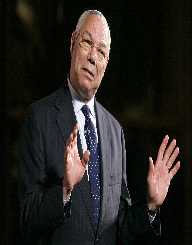 Colin Powell is someone who has managed to succeed a lot of original titles. One rank followed the other at a steady pace. If life was like this to everyone, I wonder where everyone could be. He got it all through hard work and determination. He is famously known to take the Army Chief of Staff seat as the first African-American. He is also the early African America to power the Secretary of State.

We all know that few Africans followed after him, but he has played a significant role in American foreign policy. He waved more power to the highest levels such as The White House, the Pentagon, the joint chiefs as well as the state department. He played a famed role in respectable Administration; the National Security Advisor and the Secretary of State. He is known as an intelligent player when it comes to war and politics.

On April 5, 1937, Colin Powell was born in New York and lived with his parents; Luther Powell and Maud Powell. At his tender age, Colin’s family went to live in South Bronx neighborhood in New York. He was lucky to have hardworking and respectable parents. They reminded him of the importance of education.

Colin was an average student, and he managed to score a C grade most of his term. After school, he used to work at a nearby furniture store that made him make some extra income. After graduation, he later attended the prestigious City College of New York. He studied geology and afterward joined the Reserve Officers Training Corps ROTC.

Colin learned different ethics of being in the military world. He committed most of his time exercising and cramming the military rules. That is when he applauded himself knowing that his career is knocking on the door. He trained to be a professional officer.

In 1958, Colin Powell graduated from the Military College and later joined as a lieutenant in the army. He would attend simple training that was held at Fort Benning, Georgia. That is where he knew that whites and blacks went to different schools, bathrooms, and restaurants. It was tough for him to accept his new environment.

Fortunately, he lived peacefully in the army. He was just another recruited starter, and he had some duties to attend to. After his training, Colin landed his first job as a platoon leader in Germany. He later went to the U.S and lived in Massachusetts in 1960. That is where he found the love of his life Alma Vivian Johnson and married in 1962 and was blessed with three children.

Colin Powell was later moved to Vietnam where he worked as an advisor in 1963 in the Vietnam War. By bad luck, he stepped into a setting trap that was set by the Vietnams and injured him. It took Colin several weeks to recover. He received the Purple Heart for being wounded while on duty.

Afterward, he returned and was given several lessons of training. In 1968, he later moved to Vietnam. Before then he was promoted to the major general. That is where he was sent to conduct the My Lai Massacre incident.

Unfortunately, he didn’t manage to arrive safely. Reason being the helicopter he was in crashed and caught fire. Luckily he managed to escape the fire since he was thrown few meters away from the scene. He managed to pull other colleagues for safety. The bravery act garnered him the Soldiers Medal.

In mid-1997 General Colin Powell was given a chance to chair one of the Presidents’ Summits for America’s in Philadelphia. Since then he managed to preside over the Alliance for Youth an organization meant to develop education for the children of America. He majored in five different rules; taking care of the adult, taking care of the children’s structured activities after school, healthy lifestyle and a marketable approach through practical education.

General Powell is also a remarkable author, thanks to his selling biographies. My American Journey traces his life right from his childhood days and his four executive roles. After leaving Vietnam, Colin joined the George Washington University and received his MBA.

In 1972 he was assigned a White House role where he met prominent people. He was applauded several times for his amicable job hence increasing his high chances of being promoted. In 1976 he was promoted to a colonel and as a brigadier general in 1979. Powell managed to reach the four top stars general.

During his doctrine as a Chief of Staff in 1989, Colin believed that asking the U.S military questions before going to war allowed them to have a win to win end. He felt that three necessary measures should be followed. They included; diplomatic, economic and political.

In 2004, Colin Powell resigned as the military of state, and he has managed to live a busy life. He has managed to work with different children’s groups and organizations. But he maintained a low profile; Powell came to decline his stand as a Republican candidate for Presidency in 2008. General Colin Powell is still married to Alma Vivian Johnson. Colin family includes two daughters, Annemarie and Linda, son Michael, grandson Bryan and Jeffrey and daughter-in-law Jane.