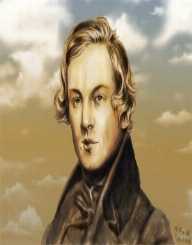 Robert Schumann was born on June 8, 1810, in the Kingdom of Saxony. He was the fifth child of his parents Christiane and August Schumann. His father was a bookseller, publisher, and novelist, which made a significant influence on Young Schumann. He first began to receive musical and piano lessons when he was seven years old, from a teacher at the Zwickau high school, Johann Gottfried Kuntzsch.

Schumann immediately developed a love for music and began composing, even without the aid of his music teacher. The two often had differences about the principles of musical composition, but his works were regarded as admirable for his age.

When Robert Schumann was 14 years old, he wrote an essay on the aesthetics of music. He also contributed writing for a book Portraits of Famous Men that his father was editing. While at school in Zwickau, Schumann read the works of such philosophers as Schiller and Goethe and the Greek tragedians, but his biggest literary inspiration was the German writer Jean Paul.

Robert Schumann was also interested in musical works of Beethoven, Schubert, and Mendelssohn. His father was encouraging him to pursue a career in music, but he died when Schumann was 16 years old. He left school in 1828 and went to Leipzig to study law, to meet the terms of inheritance. He continued his law studies in Heidelberg and became the member of Corps Saxo-Borussia Heidelberg.

In 1830, Robert Schumann heard a concert of the Italian violinist Niccolo Paganini. After this, he went back to Leipzig and began taking piano lessons from his old master Friedrich Wieck. He quickly abandoned the idea of becoming a concert pianist, mainly due to an injury to his finger. Instead, he decided to devote himself to composition and began studying music theory under Heinrich Dorn. In 1832, while visiting his relatives in Zwickau, Schumann performed the first movement of Symphony in G minor. This work was only published after his death.

In 1833, his brother and sister-in-law died in the cholera epidemic, which brought on a major depressive episode. By 1834, Robert Schumann recovered and inaugurated the New Journal of Music. He published most of his writing in the journal and campaigned to revive the interest of major past composers. He was also promoting the work of contemporary composers. In 1834, Schumann published one of his most original piano works Carnaval, Op.9.

In 1837, Robert Schumann published a complex set of etude-like variations, Symphonic Studies. This work was dedicated the young English composer William Sterndale Bennet and required a finished piano technique. The same year, Schumann also published “Dances of the League of David.” The following year, he published his piano work Kinderszenen, Op. 15 and one of his most famous piano pieces “Traumerei” in F major.

One of Schumann’s most celebrated works Kreisleriana, Op. 16 was published in 1838. He used this peace to express the emotional states of fantastic and mad. His next work, Fantasie in C, Op. 17 was also a work of passion, inspired by Beethoven. After a visit to Vienna in 1839, Schumann wrote the Carnival Prank from Vienna.

Until 1840, Schumann wrote almost exclusively for the piano. During this year, he wrote more than 138 songs. The following year he wrote the Symphonies No. 1 in B-flat and No. 4 in D-minor. In 1842, Schumann began writing chamber musing, including one of his best-known works the Piano Quartet.

During this time, Schumann was engaged in setting Goethe’s Faust to music. In 1844, he left his editorial work and moved to Dresden, where he suffered from nervous prostration. He was struggling with thoughts about death and imagined the note A5 in his ears. His state at the time is reflected in his Symphony in C. in 1984, Schumann wrote his only opera Genoveva. In 1949, he wrote the music for Byron’s Manfred, which became one of his most frequently performed orchestral works.

Robert Schumann's mental state slowly started to deteriorate. Beginning with the 1850s, he composed in a wide variety of genres and often experimented with music. In 1950, he became the musical director at Dusseldorf, but was a poor conductor and was opposed by the musicians. His contract was terminated. The same year he also composed his Symphony No. 3. “Rhenish” and the following year revised and published his fourth symphony.

In 1853, Schuman met the young composer Johannes Brahms and amazed him with his music. Brahms stayed with Schumann for several weeks and became a close friend. Schumann, Brahms, and Albert Dietrich collaborated on the composition F-A-E Sonata.

Schumann later began to edit his complete works and created an anthology on the subject of music. He began to suffer from the symptoms he had before and started hearing songs and noises in his head. At one occasion, he left his bed because he dreamt of a ghost which had dictated a “spirit theme” to him. He later wrote this theme for piano, published as the Geistervariationen.

In 1834, Robert Schumann was in relation with 16-year-old Ernestine von Fricken, who was an adopted daughter of a Bohemian-born noble. Upon learning that she was born illegitimate, Schumann broke up with her. By the end of the year, he had fallen for the 15-year-old Clara Wieck. Their romance was soon brought to end when her father learned about their meetings.

After a long battle with her father, Schumann finally married Clara in 1840. She was an inspiration, critic, and confidant to her husband. Clara was an active and energetic woman and kept up with the schedule of concert tours between having their eight children.

In 1854, Schumann’s symptoms worsened, and his beautiful visions soon became replaced by demonic visions. He attempted to commit suicide by jumping off a bridge into the Rhine River. He was rescued by boatmen and asked to be taken into an asylum for insane. Schumann entered Dr. Franz Richarz’s sanatorium in Endenich and remained there until his death in 1856. It is now believed that his symptoms were caused by syphilis, which he might have contracted during his time as a student.

Another version is that Robert Schumann might have suffered from mercury poisoning, which was used to treat syphilis. After his death, Clara continued her career as concert pianist which allowed her to support the family. She became the authoritative editor of her husband’s works for Breitkopf & Härtel. It was rumored that she and Brahms, who stayed with her after Schumann’s death, destroyed many of his works that were thought to be tainted by his madness. It is known that Five Pieces for Cello and Piano were damaged.