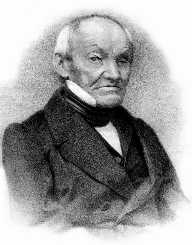 Carl Ritter was born on August 7th, in 1779. He was famous for being a German geographer. Together with Alexander von Humboldt, the two are considered to be among the early founders of modern Geography. He also served as the Geography chair at the University of Berlin from 1825 to the time of his demise.

Born on August 7th, 1779, Carl Ritter rose to become an iconic geographer. His birthplace was in Quedlinburg, Germany. He was born to a well-known family headed by F. W. Ritter who was his father. He was a highly respected individual in the society. His father was a professional doctor. Unfortunately, Ritter lost his father when he was only two years old.

When Carl Ritter was aged five, he joined Schnepfenthal Salzmann School. This school’s primary area of education was in the study of nature. It is from his early training that Ritter got his profound influence in developing a particular interest in Geography.

When Carl Ritter completed his early education, he was sponsored by a wealthy individual to pursue his higher studies. In return, Ritter was to tutor the children for the person that sponsored him. He went for his college education at the University of Halle. Nonetheless, he kept tutoring for about fifteen years.

When Carl Ritter was only 25 years old, he made his first publication. This described the natural features which existed in Europe. In 1807, he crossed paths with Humboldt. Their shared interest in geography and human phenomena impressed them. Ritter’s next geography publication came in 1811. This two-volume publication described Europe’s geography. Three years later, he enrolled with the University of Gottingen where he pursued Geography among other subjects.

Carl Ritter met with Lilli Kramer while he was schooling at the University of Gottingen. They fell in love with each other and got married later.