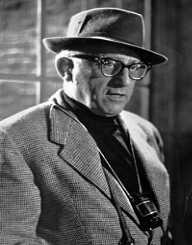 An architect of Classics of Film Noir: Robert Siodmak

Robert Siodmak was born on August 8, 1900, in Dresden, Saxony, Germany to parents Ignatz Siodmak and Rosa Philippine Blum. His parents were both descendants of Jewish families based in Leipzig. Curt Siodmak was his younger brother. Robert Siodmak studied at the University of Marburg. He worked for the state-run German Film Company Universum Film A.G., which was founded by General Erich Ludendorff. Initially, he was mainly involved with the translation of intertitles for American silent films. In 1925, he worked as a Stage Director and a Banker.

Later, Robert Siodmak became editor and scenarist for Curtis Bernhardt. Incidentally, Bernhardt directed a film ‘Conflict’ in 1945 in which Siodmak was the story writer. He was hired by his cousin Seymour Nebenzal and was assigned the work of assembling original silent movies from the stock footage of old films. He worked with Nebenzal for two years and convinced him to finance his first feature film.

Thus, Robert Siodmak's first directorial venture, a quasi-documentary film ‘Menschen am Sonntag’ (People on Sunday) was released in 1929. It was the last German silent film. His brother Curt Siodmak and Billy Wilder were the co-screenwriters, Fred Zinnemann was the assistant cinematographer, and Edgar G.Ulmer was the co-director. All these German Filmmakers later found success in the Hollywood Film Industry.

Robert Siodmak made his second film using sound for the first time. It was a comedy film titled Abschied and was released in 1930. This was followed by a number of films like ‘Der Mann, der seinen Mörder sucht’ (The Man in Search of His Murderer), another comedy, in 1931, ‘Voruntersuchung’ (Inquest) in 1931, Crime Thriller ‘Stürme der Leidenschaft’ (Storms of Passion) in 1932 and ‘Quick I and II’ also in 1932. In 1933, Siodmak made a film ‘Brennendes Geheimnis’ (Burning Secret). It was an adaptation of a novel by Stefan Zweig. Joseph Goebbels, Hitler’s minister of propaganda, commented that the film contained ‘sick sultriness and airless muddle-headedness’ after viewing the film and banned its exhibition.

Siodmak left Germany and moved to Paris in 1933 to avoid the increasingly growing atrocities perpetrated by the Nazi regime under Hitler particularly on the Jews. He directed around 15 modestly successful films during his brief directorial career in Germany.

After moving to Paris, his creativity prospered, and for the next six years, Robert Siodmak worked on many film genres, from comedy to thrillers to musical. ‘Le Sexe faible’ (‘The Weaker Sex’) in 1933, ‘La Crise est finie’ (‘The Depression is Over’) and ‘La Vie Parisienne’ (‘The Parisian Life’) in 1935, ‘Mister Flow’ and ‘Symphonie D’Amour’ in 1936, ‘Cargaison Blanche’ (‘Woman Racket’) in 1937,  ‘Mollenard’ (‘Hatred’) and  ‘Ultimatum’ in 1938  and ‘Pieges’ or ‘Personal Column’ in 1939 are some of the memorable films directed by Siodmak during this period.

Robert Siodmak moved to America just one day before the start of the World War II in 1939. He was signed up by Paramount in 1941. He made three films for Paramount, ‘West Point Widow’ in 1941, ‘Fly-by-Night’ and ‘My Heart Belongs to Daddy’ in 1942. In 1943, he made a seven-year-contract with the Universal Studios and directed ‘Someone to Remember’ and ‘Son of Dracula’ based on the original story by his brother Curt. He made his next film ‘Cobra Woman’ starring Maria Montez/Jon Hall using Technicolor in 1944. One of his first bleak film noir ‘Phantom Lady’ was released in 1944. It was produced by Joan Harrison and starred Ella Raines.

The success of ‘Phantom Lady’ inspired Robert Siodmak to make more such films. He made another film in 1944, ‘Christmas Holiday’ starring Deanna Durbin opposite Gene Kelly (This film received an Oscar nomination in the category Best Music). Under Universal Siodmak went to to make more noir style films including the likes of ‘The Suspect,’ ‘The Strange Affair of Uncle Harry’ and ‘The Dark Mirror.’ On loan to the ‘RKO Studios,’ he made an Alfred Hitchcock style thriller titled ‘The Spiral Staircase’ in 1946. Another one of his best bleak noir style film ‘The Killers’ was released in 1946 starring Burt Lancaster and Ava Gardner.

Continuing his association with Universal, Robert Siodmak made two more films, ‘The Dark Mirror’ in 1946 and ‘Time Out of Mind’ in 1947. He made ‘Cry of the City’ under the ‘20th Century Fox’ banner while on loan in 1948. In the same year, he made another of his memorable noir style film ‘Criss Cross’ under the contracted banner of Universal starring Burt Lancaster and Yvonne De Carlo. He worked under different banners and made ‘The Great Sinner’ for MGM in 1949, ‘The File on Thelma Jordon’ and ‘Deported’ in 1950, the latter one being his last film under Universal and ‘The Whistle at Eaton Falls’ in 1951 on behalf of ‘Columbia Pictures.’

In 1952, Siodmak made his successful film ‘The Crimson Pirate’ and moved to Europe. In Europe, he worked for the next 16 years and made films in Britain, West Germany, France, Spain, and Italy. Collaborating with various filmmakers of Europe he made 14 more movies after 1952. However, the aura and charismatic charm of his Hollywood films especially his classic noir style films could not be repeated, and Siodmak tasted modest success with these 14 films.

Robert Siodmak returned to Hollywood again in 1967 with the widescreen western ‘Custer of the West.’ Unfortunately, with negative reviews from the critics, the film was unable to generate any box office success too. He concluded his filmmaking career shortly afterwards with a six-hour, two-part toga, and chariot epic, ‘Kampf um Rom’ in 1968.

Robert Siodmak married Bertha Odenheimer in 1933. They lived together until her death on January 20, 1973. They were issueless. Siodmak breathed his last on March 10, 1973, barely 50 days after his wife’s death in Locarno, Switzerland.