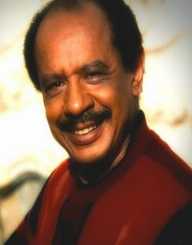 American actor and comedian Sherman Alexander Hemsley was born on February 1, 1938, in Philadelphia, Pennsylvania, USA. He was raised by his mother, who worked at a lamp factory in South Philadelphia. Sherman attended Barrat Middle School and Central High School up to the 9th grade. In his 10th grade, he was receiving education from the Bok Technical High School, when he dropped out of school to join the United States Air Force.

Sherman Hemsley served in the Air Force for four years. He returned to Philadelphia after leaving the Air Force and took a daytime job in the United States Postal Service. He simultaneously took up a course in acting by attending the Academy of Dramatic Arts during the evening hours. Hemsley moved to New York in the year 1967 where he continued his daytime Post Office work while working as an actor during the evening hours. In New York, he performed with the Negro Ensemble Company and Vinnette Carroll’s Urban Arts Corps and also in some off-Broadway productions.

While performing in the Broadway musical ‘Purlie’ (1970-71) as "Gitlow," Norman Lear, creator of television sitcom ‘All in the Family’ offered Sherman Hemsley the role of George Jefferson after getting impressed with his performance in ‘Purlie.’ As Sherman was reluctant to leave his theatre roles at that time, Norman Lear decided to wait for him and held the role open for him. After the completion of the show of Purlie, Sherman joined the cast of the Vinnette Carroll musical ‘Don't Bother Me, I Can't Cope’ ensemble in Toronto.

The excellent chemistry between Hemsley and Sanford, the onscreen duo of husband and wife, helped Weezy and George become one of television’s most beloved couple. The Jefferson family received their due share when Norman Lear created the sitcom ‘The Jeffersons,’ a spin-off of ‘All in the Family.’ ‘The Jeffersons’ debuted in 1975 and saw a successful run for the next 11 seasons. In 1985, the show ended, but Hemsley continued to act in the television industries and was mostly typecast in Jefferson type roles. The original team of The Jeffersons was once again united for a brief period for a show in the Broadway.

In 1986, Sherman Hemsley joined the cast of NBC’s Amen in the role of a church deacon, Deacon Ernest Frye. The sitcom was successful enough to run for five full seasons. Hemsley worked as a voice-over artist in the ABC live-action puppet series ‘Dinosaurs’ after the conclusion of the show of Amen in 1991. This series also ran for four seasons ending in 1994. He lent his voice to the character of Bradley P. Richfield, boss of the main character Earl. In 1996, Hemsley returned to sitcoms with an appearance in ‘Goode Behavior,’ playing the character of an imprisoned scam artist who was released into the custody of his estranged son. However, the show failed to elicit any positive response from the audiences’.

‘The Fresh Prince of Bel-Air’ saw the coming together of Hemsley and Sanford once again in their most popular characters of George and Weezy Jefferson and people once again welcomed them with open arms and showered the adorable couple with immense love. The popularity of the couple was so widespread that they started appearing in advertising commercials together. In total, Hemsley played the character of George Jefferson on four different television series and in a film. These were: ‘All in the Family’ (1971), ‘The Jeffersons’ (1975), ‘E/R’ (1984), ‘The Fresh Prince of Bel-Air’ (1990), and the film ‘Mafia!’ (1998). However, in 2011 he reprised his role as George Jefferson for one last time on Tyler Perry's ‘House of Payne.’

In 2012, Sherman Hemsley was inducted into the Television Academy Hall of Fame.

Being a shy and intensely private person nothing much is known about his personal life. Sherman Hemsley never married and had no children. In a rare video interview to the Archive of American Television, he admitted the difficulty he faced in portraying George Jefferson and confessed that he was looking forward to playing such a character. It was, in his opinion, the character of his life and he had to do it.

On July 24, 2012, Sherman Hemsley passed away in his El Paso, Texas home at the age of 74. The reason for his death in medical terminology is superior vena cava syndrome which is a complication of lungs and bronchial carcinomas.