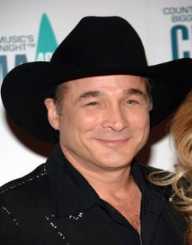 American country singer, songwriter, singer, and music producer Clint Patrick Black was born on February 4, 1962, in Long Branch, New Jersey, United States of America. He was the youngest of the four children of his parents G.A. Black and Ann Black. Clint was brought up in Houston, Texas, where his father worked as a crane operator. Music was the prime pastime of his family. He learnt to play harmonica before the age of 13 and penned his first song at the age of 14. At this age, his parents realized that their youngest son has a recognizable voice.

During his early teenage years, Clint Black was influenced by a variety of talented musicians and singers like George Jones, Lefty Frizzell, and Dire Straits. Apart from singing, he also started playing acoustic guitar by the age of 15. He joined his three elder brothers, Mark, Kevin and Brian and formed a small band. On weekend afternoons, they used to sing in front of a considerable number of invitees chosen from their neighbourhood in the barbecues hosted by their family in their backyard. During his high school days, the guitar was his constant companion. He came second in a school singing talent show. He graduated from high school in 1980 and started pursuing a solo singing career.

During the early 1980s, Clint Black was attracted to a wide variety of musical genres. Initially, his focus was on country music. From 1983 to 1988, he managed to look after himself working as a construction worker, fishing guide and bait cutter during the daytime and singing at various nightclubs in Houston, playing and singing covers of Merle Haggard, Loggins and Messina, Charlie Daniels, Willie Nelson, and even Dire Straits.

In 1987, Clint Black met another guitarist, Hayden Nicholas at a gig. They formed a partnership wherein Nicholas provided the tunes for the lyrics written by Clint. The partnership went very well and continued for decades. They delivered a demo of their combination "Nobody's Home" to record promoter Sammy Alfano. Impressed by the demo and Clint’s regular performance at the Houston nightclubs, ZZ Top manager Bill Ham invited Clint to a meeting.

The meeting bore fruit, and within five months Clint Black was able to clinch a recording contract with one of the most aggressive labels in country music, RCA Records. His first album with RCA Records ‘Killin' Time’ was released in 1989. The songs of the album were written either by the combined effort of Clint and Nicholas duo or were a solo effort by Clint. He also played the role of the lead vocalist and even played the guitar. He used his road band for recording the album and avoided using session musicians. ‘Killin’ Time stayed on top of the country album charts for 28 weeks.

Among its four no. 1 singles, “A Better Man,” his debut single, climbed to no. 1 on the country charts. It was the first debut single to achieve such distinction in 14 years. He churned out a no. of singles including "Walkin' Away,” "Nothing's News" and "Nobody's Home." All these singles and the title cut ‘Killin’ Time’ rose to the position of no. 1 hit on the Billboard Country Album Chart and the album itself was certified triple platinum.

In November 1990, Clint Black’s second album ‘Put Yourself in My Shoes’ was released. The album climbed to the number two position on the country chart and remained in top 20 positions on the pop album charts. Though his second album did not meet as much success as his first one, by mid-1992 the combined sale proceedings of his two albums touched 5 million copies.

Clint initiated a lawsuit against his manager, Bill Ham in March 1992 for breach of contract. The pendency of the suit and the difficulties arising out of it delayed the release of his third album. Eventually, his third album ‘The Hard Way’ was released on July 14, 1992. Had the album released earlier, as was expected, the competition would have been less. The music scenario of the country quickly changed during the period of delay in releasing the album, and it faced stiffer competition from the emerging generation of musicians like Travis Tritt, Alan Jackson, and the latest teen idol Billy Ray Cyrus.

Clint Black launched The Hard Way Tour on June 26, 1992, to promote the album. The tour went on for 11 months. His fourth album, ‘No Time to Kill’ was released around one year after the release of the third one. The album received mixed reviews including a complaint of strained voice in some of the serious songs of the album.

After the not so encouraging response ‘No Time to Kill’ received, Clint released another album, ‘One Emotion’ in 1995. The album accounted for five straight top five hits. He became the fourth country music singer in 1996 to earn a star on the Hollywood Walk of Fame. He released his first greatest hits package later in the same year. His 1997 release ‘Nothin' but the Taillights’ appeared to be lost in mediocrity and performed reasonably well. In 1999, he came up with D'lectrified which had a complete reliance on acoustic instruments.

Trying his hand in acting, Clint Black appeared on television as well as in movies. In 1994, he performed in a film called ‘Maverick.’

Clint Black broke many hearts when he married singer-actress Lisa Hartman in October 1991 after dating her for about a year. They were nominated for a Grammy Award in 2000 for their combined musical act, "When I Said I Do," which hit No. 1 on the country chart. He is elected as a member of the Grand Ole Opry since 1991.

Clint Black was an elegant looking handsome hunk with an overwhelming stage presence. His stunning appearance and pleasant demeanor got him selected by People as one of the "50 Most Beautiful People in the World" in 1991.

The Black couple was overjoyed when they welcomed their first child, Lily Pearl Black, in May 2001. Clint Black is a big star in the United States till date and has an envious fan following to boast off.