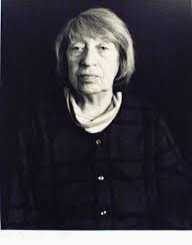 Lee Krasner was an American abstract painter who expressed her artistic work in the paint. She is remembered for her ability to disassemble some of her paintings and without a sweat re-arrange them into collages.

Lee Krasner was born in Brooklyn, New York on 27th  October 1908. She was the daughter of Chane Weiss and Joseph Krasner who were both Russian immigrants.

Her parents had fled with four children to the U.S. to escape the war in Russia. Krasner was the only child of her family to be born in the U.S.

From an early age, Lee Krasner knew she wanted to be a painter. She chose to enroll in Washington Irving High School for Girls since the school had Art as one of its subjects.

She later got a scholarship to joined Women's Art School where she got a certificate in art. She proceeded to the National Academy of Design to further her artistic skills. While working with WPA, Krasner trained under Hans Hoffmann, a renowned German artist.

After completing her education, Lee Krasner's journey to become a great artist was not a smooth one. She took on various jobs in the quest of being independent. After several going through several challenges, Krasner's dream of becoming an artist got a boost when she landed a job in the Administration's Public Works of Art Project.

Krasner worked for the agency until 1943 when it was abolished. During her time in the agency, she was able to interact with the famous artists in New York. New York art scene exposed Krasner's abilities and gave her a platform to exhibit her work.

Lee Krasner was married to Jackson Pollock, who is also an artist. The two met in 1941 and got married four years later. The couple moved in East Hampton together immediately after marriage. For many years Krasner struggled to cope with Pollock alcoholism.

An unfortunate thing occurred when Krasner was on a trip to Paris. Her husband's car crashed killing him on the spot. The cause of the accident was reported to be drunk-driving.

Lee Krasner's life was threatened by a brain aneurysm in 1960, she, however, returned to her artistic work two years later

Despite her deteriorating health, Lee Krasner did her last show in 1983 at Houston Museum of Fine Arts. One year after her last performance Lee Krasner died on 19th June 1984.