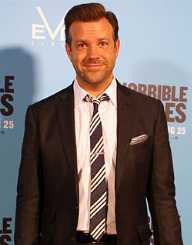 Long before he was a star of TV and film, comedian Jason Sudeikis has entertained people performing with comedy groups.  Saturday Night Live was his big break before achieving success in films.

Jason Sudeikis was born on September 18, 1975, in Fairfax, Virginia.  Comedy and acting were already in his blood.  George Wendt, an actor, known best for his role in Cheers, is his uncle on his mother's side.

The family moved to Kansas when he was young.  His childhood in Kansas gave him plenty of content for his future comedy career.

Jason Sudeikis attended the Catholic schools in Kansas City such as Holy Cross Cathedral and Jesuit Rockhurst High School. However, he transferred to the public school system where he graduated.

Even though Jason Sudeikis started his standup comedy career in Kansas City, he moved to Illinois to study improvisation.  He took to comedy theater as a member of Second City.

This time in the improv group out of Chicago, Illinois led to opportunities as the touring cast member.  Jason Sudeikis was one of the founding members of Second City Las Vegas.  Because of his experience, it was able to be hired on at Saturday Night Live in 2003.

Jason Sudeikis started as a writer for SNL.  He wrote some of the sketches and played roles as an extra.  By 2006, he was a regular cast member.  Along with some recurring roles, he was able to portray Mitt Romney during the 2012 presidential campaign. His connection to SNL also led to guest star roles on television shows.  He was on 30 Rock with fellow SNL alum Tina Fey.  Other shows include Eastbound & Down, and It's Always Sunny in Philadelphia.

As a voice actor, he has found work on The Cleveland Show until the end of the series in 2013.  Video game fans of Grand Theft Auto IV will recognize his voice as radio host Richard Bastion.  In 2016, his show Son of Zorn started in which he is the voice of the character Zorn.

Jason Sudeikis started film work in 2008 with Cameron Diaz in What Happens in Vegas.  By 2011, Sudeikis landed two starring roles in the comedy films Horrible Bosses and Hall Pass.  He returned to the sequel Horrible Bosses 2 in 2014.

While Jason Sudeikis has not won any awards at this time, he has been nominated for a few:

Jason Sudeikis has supported the efforts of charities such as