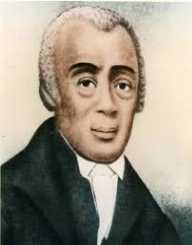 Richard Allen was an active black leader. He was an educator, writer, preacher and established the African Methodist Episcopal Church. He was a bishop.

Richard Allen was born on February 14, 1760. He was a slave on the Delaware property of Benjamin Chew. Richard and his family were sold to Stokeley Sturgis who in turn sold Richard’s mother and two of his siblings. Allen and his two siblings started to go to the local Methodist Society. Richard was self-taught to read and write.

Allen converted into Christianity. The Reverend Freeborn Garrettson was preaching freedom of slaves. Sturgis was touched by the preaching Freeborn Garrettson during his visit to the plantation. Sturgis freed all his slaves. Allen got his freedom in 1780. He changed his name from ‘Nigro Richard’ to ‘Richard Allen.’

Richard Allen found himself qualified as a preacher in 1784 at the Christmas Conference of Methodist Church in North America in Baltimore, Maryland. Allen got permission to lead the services at 5 a.m. Blacks attended the service. He shifted to Philadelphia.

The building has been owned ever since by African Americans.

Richard Allen along with other members continued their Methodist custom. An African Methodist Episcopal Church (AME) was established on July 29, 1794. Allen became a Methodist minister in 1799.

Allen and his wife Sara managed the Underground Railroad for the slaves from 1797 till death.

As a bishop, Richard Allen advocated the policy of eradication of slavery, settlement in colonies, education, and tolerance. The lectures were ‘extempore’ and convincing. In 1830, Allen organized a meeting of black representatives in Philadelphia. This meeting became the starting point for the Negro Convention Movement.

Richard Allen married Flora on October 19, 1790. She along with her husband, Allen, worked very hard in establishing a church from 1787 to 1799. Flora died on March 11, 1801, after a brief illness. No information is available on their having children.

Allen moved to Philadelphia and married Sarah Bass. Sarah, from Virginia, had obtained her freedom from slavery.

Allan and Sarah Bass had six children. She was extremely active in establishing the AME Church and is now known as ‘Founding Mother.’

Richard Allen died on March 26, 1831, at his home in Spruce. His cremation took place in the church he established.

Allen achieved honors on the feast day, March 26. He has following honors:

A park in Radnor Township in Philadelphia named after Allen (2010)

A housing project in Philadelphia named after Allen (2010)

A road in Cambridge, Massachusetts named in his honor

Painting of Allen in Philadelphia (2016).