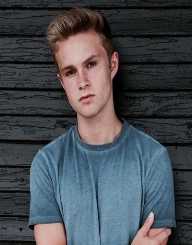 Earning fame over social media pages is the in-thing these days. One good example of a megastar over these social sites is Simon Britton. He is an upcoming star in the industry, and it is quite surprising that he has gained a lot in the few years he has been a socialite. Being a YouNow notable celebrity, Britton boasts of over 2 million followers.

Other social media pages where he is famous are on YouTube, Twitter, and Instagram. Initially, Britton had other special interests in broadcasting. He fell in love with this profession since it gave him the opportunity of entertaining other people. This attribute has greatly influenced the direction that his new career is taking. Most videos aired on his page feature his family and friends. His popular video uploads are labeled Whipped Cream and Gummy Worm Challenge and Whisper Challenge.

Simon Britton was born on June 23rd, in 1999. His place of birth was in Brownsburg, Indiana in the USA. Just before venturing in YouNow, Britton had special interests in soccer, particularly in Indiana. Nevertheless, he was happy that he made other people happy through broadcasting. From this, he thought it was wise to try out social media pages to entertain people. Fortunately, to him, this transformed his career path into something worthwhile. In no time, he became a phenomenal individual in all the social media pages that he owned. What followed next was a huge string of followers in these social pages. In Instagram, for example, he is proudly followed by over 300K followers.

Britton’s YouTube page also appeals to many, and he has close to 50K subscribers to his channel. Things are also good on Twitter as over 70K followers follow him. On YouNow channel, where he gained his high acclaim, he has close to 280K followers. All his supporters call themselves Simonkey.

Simon Britton earned his fame through the unique content that he posts to his social media pages. Simonkey, his followers, claim that his videos are family oriented and that they represent the good intentions that Britton has to his fans. Aside from featuring his friends and family, some of his videos also feature beautiful pets people would love to own.

Simon Britton has gained the love of many people in just a few years that he has been entertaining people over social media pages. An interesting fact that makes him stand out from other socialites is that he loves making people happy. This is a special intrinsic value that makes his videos so natural. He also finds it worthy to connect with his fan base from time to time. Therefore, he links up with them over social web pages and in the numerous tours that he undertakes regularly.

Apart from being famous over the internet, Simon Britton is also a talented soccer player. This is an activity that he initially engaged in before trying his luck over the internet. Right from the time he was aged 4, he used to play soccer in Indiana. It was not until recently in 2014 that Britton tried venturing into social media as a way of entertaining others. To him, this was an activity that he did just for fun. Luckily, things turned out great beyond his expectations.

Simon Britton’s parents are called Rick and Lori Britton. He was born in a family of three children where he is the only boy child. His sisters are called Emily and Sophie. Before earning huge fame over social media pages, Simon Britton was a talented soccer player.