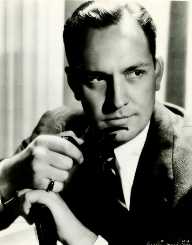 American Fredric March was born on the 31 August 1897 to Cora Marcher and John Bickel. He later used a combination of his second name and his mother’s maiden name to form a stage name: Fredric March.

Fredric March graduated from Racine High School, and after returning from serving a lieutenant in WWI, he enrolled at the University of Wisconsin where he obtained a degree in economics.

After getting his degree, Fredric March worked at the First National City Bank before falling ill. When he recovered, he decided to move to New York and pursue a career as an actor. Initially, he did various jobs in the financial sector, while at the same time taking multiple small roles in the silent movies made in New York City at the time. March’s first film was The Great Adventure (1921) which starred Lionel Barrymore. In 1926, he had his primary starring role in the Broadway production of The Devil the Cheese. He had a role in appeared The Dummy (1921) with Ruth Chatterton. The same year he appeared on stage in the play The Royal Family. Shortly afterward Paramount Pictures offered him a five-year contract

Fredric March received his first Oscar nomination for Best Actor in 1930 when he starred in The Royal Family of Broadway. The appointment established him as one of Hollywood’s leading men, and he continued acting throughout the 1930s and 1940s. Including roles in Dr. Jekyll and Mr. Hyde (1931) for which he won an Academy Award for Best Actor.