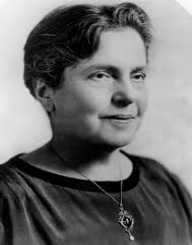 Lillian Wald was born on March 10, 1867, in Cincinnati, Ohio. She was an American nurse, humanitarian and a reformer who helped the less fortunate. She also fought for the rights of women and children and established the Women’s Trade Union League.

She also established the Children’s Bureau in 1912 which looked into the welfare of children. She also worked towards racial integration and promoting world peace during World War I.

Lillian D.Wald was born on March 10, 1867, in Cincinnati, Ohio. She was the third born child to Max D. and Minnie Schwartz Wald. At an early age, her family relocated to Rochester, New York in 1878. She studied French and German at Miss Cruttenden's English-French Boarding and Day School for Young Ladies.

In 1883, she tried enrolling at Vassar College but was denied entry because she was only sixteen. She worked as a newspaper correspondent for a few years. In August 1889, she joined New York Hospital to undertake a nursing program after inspiration from her friend who worked as a nurse at Bellevue Hospital in New York City.

In March 1891, Lillian D.Wald graduated from New York Hospital and served for a year at the juvenile asylum. She later returned to undertake her M.D degree at the Woman’s Medical College. While at the college she came into contact with the poor immigrants who sought treatment in the facility. She was moved by their unfortunate conditions and decided to provide medical aid.

In 1893, alongside her friend Mary Brewster, she moved to Jefferson Street where the set up ‘Visiting Nurse Service’ facility. In 1895, they relocated and moved to Henry Street, and the number of nurses increased from nine to fifteen by the end of 1900.

In 1913, the facility had expanded registering a gradual growth having nine houses, seven vacation houses, three stock rooms, clinics and membership of up to 3000 people. In 1914, the Nurses’ Settlement continued offering services to the locals with about 100 nurses in facilities.

The settlement became a ray of hope for the locals, offering a variety of services including housing, primary education, language, music lessons and also became a source of employment as it grew. In 1915, she established the Henry Street Neighborhood Playhouse which became the biggest playhouse in the Eastside region of New York.

Lillian D.Wald's philanthropic nature drew the attention of Jacob Schiff who decided to sponsor the project by providing housing for her team In Henry Street. When the World War I broke out in Europe in 1914, she took the forefront to preach peach. Alongside Jane Addams a social reformer and several others, she established the American Union Against Militarism in 1914.

Together with Fanny Garrison Villard, she led over 1000 women in the anti-war protest on August 29, 1914, in New York City.  This movement led to the formation of the Women's International League for Peace and Freedom (WILPF).

Lillian D.Wald founded the Columbia University of Nursing and the Federal Children's Bureau in 1912. She also established the Town and Country Nursing Service of the American Red Cross. Being a civil rights activist especially during the war, she founded the National Association for the Advancement of Colored People (NAACP).

She received some honors including Gold Medal of the National Institute of Social Sciences (1912), the Rotary Club Medal and the Better Times Medal. The Lincoln Medallion accredited her for her excellent contributions in New York.

She was inducted into the Hall of Fame for Great Americans in 1970. The Lillian Wald Houses on Avenue D in Manhattan is named in her honor.

Lillian D.Wald cherished her work that she never considered getting married but kept close friends like author Mabel Hyde Kittredge and lawyer Helen Arthur. She was battling heart ailments from 1925 to 1933 when she decided to quit the Henry Street Nursing Settlement owing to poor health.

In 1937, she settled in Westport, Connecticut and stepped down as the chairperson of the settlement. On September 1, 1940, she died of cerebral hemorrhage in Connecticut at the age of seventy-three.