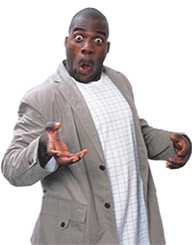 Bobby Ologun was born 8th April 1973, in Ibadan, Nigeria. He was one of 31 children. He did his study at the University of Nigeria, located in Nsukka.

After graduating from university, Bobby Ologun re-located to Japan, where he worked in a trading company that was managed by his father. Bobby Ologun is a comedy actor, director, and mixed martial artist. Soon after moving to Japan, he found himself appearing on the Karakuri TV, and soon became a regular on the show due to his popularity. Part of what he did was to try different jobs and skills in which he had no previous experience. In one of the skits, he tried judo and went on from there to try different martial arts. Between 2004 and 2006 he had several mixed martial arts fights. He won two and lost three. Early in 2006, there was some controversy as Ologun was accused of assaulting Katsuyuki Ito, the President of R&A Promotions, who represented him. It was supposedly over money but was denied by Ologun.

During the police investigation that followed, it is alleged Ologun lied about his age. His official birth year is given as 1973, but is, in fact, 1966. Ologun also denied lying about his age and maintained he was born in 1973. After the police investigation, Bobby Ologun was banned from appearing on television in Japan for three months and placed under house arrest for the same period of time.

He was able to return to television after the three months, but work was very limited, and he accused R&A Promotions of not providing any work for him. Although still under contract to R&A Promotions, in May 2006, Bobby Ologun announced he would be starting his talent agency, called Alemco Productions. A short time after, it was announced that Ologun and R&A Promotions had agreed, and they would be representing him going forward.

In 2007, Bobby Ologun announced on television that he had become a naturalized Japanese citizen, and had taken his wife’s name, and was known after that as Bobby Konda.

Bobby Ologun married Kyoko Konda in 1999, and they have five children.