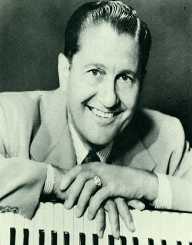 Lawrence Welk was an American television personality and musician born on March 11th, 1903. He is best remembered for hosting for many years the TV program The Lawrence Welk Show. He began hosting it in 1955 till later in 1982. He also hosted a show of his own for more than two decades. Besides being a TV personality, Welk also lead many bands. Furthermore, he owned his businesses being a skillful businessman.

Lawrence Welk was born on March 11th, 1903 in a German-speaking community. His place of birth was in Strasburg, North Dakota in the United States. He was the sixth child of Christiana Welk and Ludwig. After great persuasion, his father bought him an accordion. He then began practicing polka music.

Lawrence Welk attended the MacPhail Centre for Music situated in Minneapolis, Minnesota. He graduated from the institution in 1927.

Lawrence Welk decided to become a full-time musician at the age of 21. He then began playing Polka style music with local bands in his area. After a while, he came up with his band, ‘The Lawrence Welk Novelty Orchestra.’ This band became the radio station band of WNAX in Yankton in South Dakota.

After a while, Lawrence Welk and his band members changed its name to ‘The Hotsy-Totsy Boys.’ They again changed it to ‘The Honolulu Fruit Gum Orchestra’ after some time. At last, they decided it should be ‘The Biggest Little Band in America.’

The band moved to Omaha in 1937.They also toured around the country using their car. By then they had limited funds to afford luxurious traveling means. The group later performed at Trianon ballroom in Chicago in 1940. This was one of their biggest achievements in the music industry. In fact, Welk decided to move his family to Chicago where they lived for ten years.

His band also began performing in New York City at Roosevelt Hotel. Meanwhile, Lawrence Welk collaborated with Red Foley and recorded his version of ‘Shame on you’ by Spade Cooley. Between 1941 and 1951, his band had a golden opportunity to their National radio program. Later in 1951, he moved to Los Angeles after participating in a successful late-night TV show there. He then produced The Lawrence Welk Show on KTLA television station which premiered in 1955.

Lawrence Welk was appointed as ‘Theodore Roosevelt Rough Rider Award’s’ charter member in 1961. Given his Polka music contributions, he was also received to the International Polka Music Hall of Fame in 1994. He recorded a ‘Hollywood Walk of Fame,’ and his star was kept in Hollywood Boulevard. His other star is in Vine Street for television.

In April 1931, Lawrence Welk exchanged wedding vows with Fern Renner. The couple was blessed with three children including their son Lawrence Welk Jr. The two remained married till Welk’s death in 1992. He also had grandchildren as well as great grandchildren.

Lawrence Welk breathed his last on May 17th, 1992 at Santa Monica, California after suffering from Bronchopneumonia. He was 89 years old at the time. His body was laid to rest in Holy Cross Cemetery, Culver City situated in California.