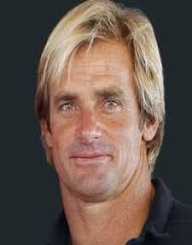 He was born in an experimental underwater saltwater tank called "bathysphere" specially made at the UCSF Medical Centre, San Francisco, California to soften the labor pain. Laird’s date of birth is March 2, 1964. His father L.G. Zerfas deserted his family even before Laird’s first birthday.

His mother Joann moved to Hawaii along with her toddler child after the desertion of her husband. Laird met William Stuart Hamilton, a surfboard shaper and glasser on Oahu where Laird was being raised during his growing up days.

Both Laird Hamilton and William bonded well and became each other’s consort within no time. William accompanied Laird to his home and met his mother after being invited by the latter. Eventually, William married Laird’s mother thus becoming his stepfather. Laird followed his stepfather when his newlywed parents moved to a faraway vale on Kaua?i Island. There he was gifted a half-brother by his newly adopted parents. His mother passed away in 1997 after suffering from a disease called brain aneurysm.

Laird attended Kapaa High School but dropped out at eleventh grade to focus his attention towards pursuing a modeling career. He bagged a modeling contract after a photographer of the Italian Men's Vogue magazine L'Uomo Vogue stumbled on him on a beach in Kaua?i.

Laird Hamilton also got an opportunity of a photo shoot with renowned actress Brooke Shields in 1983. After the initial modeling assignments, Laird restricted himself in only sporadic fashion and action sports modeling.

Laird Hamilton became an accomplished surfer under the inspiration and guidance of his stepfather, popularly known as Bill Hamilton. He possessed an adventurous psyche since his childhood jumping off from a high cliff to deep lagoons during his preteen days. He grew up in a locality inhibited mainly by local Hawaiian and Asian population.

He and his brother were bigger physically than his Hawaiian and Asian counterparts. With inborn natural aggression coupled with superiority in physical structure, he and his brother bullied their way during his teen and early adult days. Surfing came quite naturally to him, and by the age of 17, he was in a position to forego his modeling career in exchange of a career on surfing’s world championship tour.

However, unlike his father, he too considered surfing not as a competitive career option but as a work of art. He had seen the politics involved in the competitive surfing contest from close quarters by watching his stepfather’s surfing career.

He mostly avoided the professional surfing contest circuit and instead appeared in some action-adventure films including the 1987 movie ‘North Shore’ and the 1989 windsurfing movie ‘Moving Target.’

Laird Hamilton attempted to be the first surfer to complete a 360-degree loop while his feet firmly strapped on the surfing board. His attempt was featured in the 1990 ski film, 'Groove - Requiem in the key of Ski.' He continued to excel as a big wave surfer and in early 1990 formed a small group of fellow surfers popularly known as ‘Strapped Crew,’ who indulged in extreme adventure sports.

The group pushed themselves further to break all barriers in surfing and engaged in displaying dangerous stunts including 30 feet high jumps on sailboard and then touching the paragliders hovering above and tackling big waves. In the movie ‘Waterworld,’ Laird was working as the body double of Kevin Costner, appearing in all the stunts on behalf of Costner. In doing so, he was once almost lost at sea when his Jet Ski ran out of gas.

Laird is a passionate fan of some adventure and extreme sports including snowboarding, skydiving, mountain biking, and motocross. He successfully anchored some television programs involving extreme sports. He hosted ‘The Extremists’ aired from 1996 to 1997 and 'Planet Extreme Championships' in 2000.

He landed many enviably remunerative endorsement contracts with various top-level companies and brands and also appeared in some advertisements for companies of the likes of Davidoff Cool Water cologne and American Express.

Laird Hamilton married model-turned-professional beach volleyball player Gabrielle Reece on November 30, 1997. The couple was blessed with a daughter. Laird also has a daughter named Izabela from his first marriage with Maria Souza, a designer-cum surfer by profession. He married Maria in 1992. The marriage ended in divorce in 1995.

Laird Hamilton is regarded as the greatest big wave surfer in the history of the concerned sports.