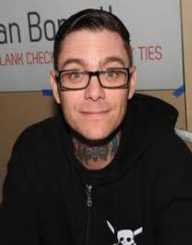 Brian Eric Bonsall was born on December 3, 1981. He was born in Torrance California and began an acting career at the tender age of 4 years old.

At the age of 4, Brian Bonsall began playing Andy Keaton on family ties in 1986. He won 3 young artist awards for his roll on the series. Then in 1990, he stared in a made for tv movie called “Do you know the muffin man?” This movie too he was nominated for a young artist award.

Making his feature film debut in 1992 he played in a horror film called “Mikey.” In this movie, he played Mikey, a boy who murdered his parents then terrorized his adoptive parents.

Getting into the science fiction scene, Brian Bonsall played in seven episodes as a half Klingon. He played as Worf’s son Alexander Rosendo on the tv show Star Trek: The Next Generation.  These episodes span over several seasons.

In 1993 he played in the movie “Fatherhood” with Patrick Swayze as his son. Following that he had a busy year in 1994. He stared in two movies, Disney’s “Blank check,” and co-starred in a tv movie “father and scout” along with Bob Saget.

By 1995 he retired from acting. He moved to Boulder Colorado with his mother and stepfather where he attended Boulder High School. He graduated in 2000. While in high school in 1998 he and his friends formed a rock band called “Late Bloomers.” He also performed in a couple boulder based punk bands called “Thruster” and “The Light on Adams Stereo.” He also worked on some solo projects of his own.

On March 28, 2007, Brian Bonsall was in trouble with the law and was sentenced to 2 years’ probation on August 31, 2007, for assaulting his girlfriend. Brian failed to appear in court and violated his parole in July 2008. So, he was arrested on December 7, 2009, for a third-degree assault and the failure to appear.

Brian Eric Bonsall was arrested on charges of marijuana use which was a violation of his release in February 2010. In April he was sentenced to 2 years’ probation.

Brian Eric Bonsall married Courtney Bonsall on October 21, 2017, and are together to this day. His net worth is only around Five thousand dollars despite his acting career and his music career.