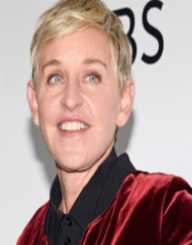 Ellen Lee DeGeneres was born on 26 of January, 1958 in Metairie, Louisiana of New Orleans. Her parents are Elizabeth Jane Pfeffer and Elliott Everett DeGeneres; she has an older brother Vance. Ellen Lee lived with her mother and stepfather Roy Gruessendorf in Atlanta, Texas after her parents separated in 1974.

Ellen Lee attended Grace King High School in Metairie until her move to Atlanta. She graduated from Atlanta High School in 1976. After a semester at the University of New Orleans, she dropped out as a communication major.

Ellen Lee started doing clerical work, before moving on to other jobs like waitressing to sales. She job hopped until she started to do stand- up comedy in small clubs and coffeehouses. She was the Master of Ceremonies at Clyde’s Comedy Club in New Orleans in 1981, with the support of her mother. After 1982, Ellen began touring nationally after she won the funniest person in America.

At twenty-eight, Ellen Lee was invited to The Tonight Show Starring Johnny Carson. She remains the first female comedian to sit on the famous couch on the show. Her appearance allowed her to be invited to more talk shows; Ellen Lee was a guest at David Letterman, Jay Leno, Oprah Winfrey and a few more. Ellen Lee fame allowed her to venture into films in the early 1990s; she was in Coneheads and Ellen’s Energy Adventure. But her television series flopped, Ellen was in Open House and Laurie Hill. Soon, she had her sitcom on ABC during 1994, initially titled These Friends of Mine, it was later changed to Ellen .

Ellen Lee was enjoying her success until she revealed that she as a lesbian in April 1997, the announcement was made in the Puppy Episode. After that rating declined and the show was canceled in 1998. Ellen Lee returned to stand- up comedy, and her attempt to relaunch her series The Ellen Sh o take off. On the big screen, she was in Mr. Wrong and EdTV. Ellen starred alongside Sharon Stone in 2000 in If These Walls Could Talk. In 2003, her new attempt was successful; The Ellen DeGeneres Show became a popular daytime talk show. Aside from daytime talk show, she did a voiceover for Dory in Finding Nemo. She owns her own production company: A Very Good Production.

Ellen Lee also wrote a few books, such as My Point and I Do Have One, Seriously I'm Kidding and Home. She also moved onto the role of executive producer for television shows such as  Bethenny, Repeat After Me and Little Big Shots. She also hosted the Emmy Awards, Grammy Awards, and Academy Awards. Ellen Lee is the spokesperson for American Express, Covergirl, and J. C. Penney. In 2010, she started eleveneleven record label, signing Greyson Chance as her first artist.

In 1982, Ellen Lee was Showtime's funniest person in America. She won Best Female Club Standup for the 1991 Comedy Awards and was Entertainer of the year in 1997.  Her 2003 show, The Ellen DeGeneres Show, won fifteen Emmy Awards and was the first show to win an Outstanding Talk Show for Emmy in its first three seasons.

Ellen Lee dated Anne Heche in 1997, the same year she announced her sexual orientation. The pair broke up in 2000, and she briefly dated Alexandra Hedison. She dated Portia de Rossi in 2004; the couple was married in 2008 before the California Proposition 8 was passed.

Ellen Lee was a campaign ambassador to Farm Sanctuary's Adopt-A-Turkey Project in 2010; the program promoted adopting a turkey instead of eating it on Thanksgiving. She was also a Special Envoy for Global AIDS Awareness, nominated by Hillary Clinton in 2011.