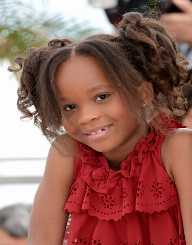 Quvenzhane Wallis known as an American actress and singer was born in Houma, Louisiana, the U.S. on August 28, 2003. She is best known for her role in the film Beast of the Southern Wild as Hushpuppy being the youngest actress at the age of 5. She also won some awards and honors following her performance in a 2012 film.

Wallis was named as the best youngest actress at the tender age of nine and became the nominee for an Academy Award in 2013, January. Quvenzhane Wallis has been active from 2011 to present day as an actress, model, and singer.

Quvenzhane Wallis was born on August 28, 2003, in Houma, Louisiana to the family of Qulyndreia Wallis and Venjie Wallis. Her parents were impressed with her career debut from a tender age and encouraged her role in the film industry. Although Wallis parents were of humble occupation, her mother was a teacher, and her father was a truck driver. Her parents named her Quven which was derived from their first names and Zhane which meant she was fair. Wallis has two brothers (Venjie, Jr., and Vejon) and one sister (Qunyquekya).

Quvenzhane Wallis began her career life at the tender age of 5 when she signed up for an audition for her first acting role. However, the industry wanted participants from age six and above, which made her parents lie about her age that she was six. She made her first appearance in the film ‘Beasts of the Southern Wild’ taking the role of Hushpuppy. Contesting against thousands of actresses, Wallis emerged the best to take the role Hushpuppy impressing director Benh Zeitlin.

Benh was finally contented that Wallis was what she was after and that with her in that role the film was at its best. Her strong-willed personality contributed to her outspoken appearance and how she presented her script. Wallis could do at most everything according to the script; she could read, speak eloquently and even do loud screams.

The film “Beast” became popular, and in 2012 it claimed the Jury Prize at the Sundance Festival. Afterwards, Wallis made trips to France to attend the Cannes Festival where the film Beast of the Southern Wild became the best and was awarded the Camera D’Or Award.

With the popularity, the filmed gained, Quvenzhane Wallis also received awards and honors for her performance. Additionally, Wallis is known to be the first African-American youngest actress to receive a nomination in the Oscars. Some of the awards Wallis received include; Alliance of Women Film Journalists Award and African-American Film Critics Association Award for best breakthrough performance.

She was also awarded the Hollywood Film Festival New Hollywood Award and the Broadcast Film Critics Association Award as being the best young actress. Quvenzhane was also nominated by different organizations for the Best Actress category.

At the age of nine, on 10, January 2013, Quvenzhane Wallis was nominated as the youngest actress for the Youngest Academy Award. The film Beast of The Southern Wild was awarded an Oscar for displaying the best graphics and for having the best director (Benh Zeitlin) for best screenplay.

Quvenzhane Wallis acting career saw her perform in many other films since 2012 beginning with ‘Beast of the Southern Wild’ as Hushpuppy. In 2013, she featured in the films ‘12 Years of a Slave’ as Margaret and the short film ‘Boneshaker’ as Blessing.

Quvenzhane Wallis also took acting roles in the following movies; ‘Annie’ (2014, as Bennett), ‘Kahlil Gibran’s The Prophet’ (2014, as Almitra). The other movies were; ‘Fathers and Daughters’ in 2015, ‘Lemonade’ a musical film taking the role ‘Herself’ and ‘Trolls’ both produced in 2016.