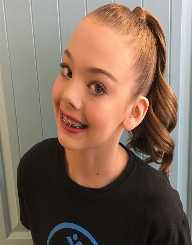 Whitney Bjerken was born on March 4, 2005, in Georgia, United States of America. She has a sister Blakely and two brothers- Sterling and Braxton. Whitney began to develop an interest in gymnastics at an early age and soon began to pursue the sport professionally.

After beginning her professional training, Bjerken soon began her rise towards gymnastics stardom. She began with contesting in regional competitions and soon moved forward to state and national level. The young girl wanted to help others to become an artistic gymnast and with the help of her parents, started a YouTube channel, showing her routines outside of the gym. Bjerken shares the intense process of her training with her viewers and soon garnered widespread recognition. Bjerken has more than 700,000 subscribers to her YouTube channel.

Bjerken’s first major achievement was in 2012 when she became Georgia AA State Champion in artistic gymnastics. This major achievement made the young girl become more passionate about the sport and keep on working harder.
Although Bjerken is only 12 years old, she already has made several major career achievements. When she was only ten years old, Bjerken was selected to be a member of United States National TOPs B Team. This was a major achievement for the young athlete since it is so rare to find dedication to a sport at such a young age. Not only Bjerken works hard towards becoming an excellent artistic gymnast, but she is also gifted with natural talent and passion for the sport.