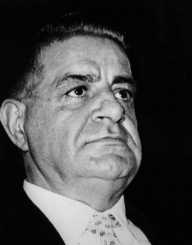 Carlos Marcello was born on February 6, 1910, in Tunis, French Tunisia, to Sicilian parents. At age one, his parents took him to the United States of America, where the family settled in a decaying plantation house near Metairie in Jefferson Parish in New Orleans. Even at a young age, Marcello was involved in petty crime in the French Quarter.

Carlos Marcello was involved in several crimes and was imprisoned for being behind a crew of teenage gangsters who were involved in armed robberies in surrounding towns of New Orleans. Local newspapers around that time compared him to the character Fagin in the novel Oliver Twist by Charles Dickens. Carlos Marcello was later released, but it was just a matter of time for him to go back to prison. Carlos Marcello was arrested and convicted for robbery and assault and sentenced to nine years imprisoned at the Louisiana State Penitentiary in West Feliciana Parish. After serving for five years, Carlos Marcello was released from the prisons. As he was always closer to troubles, Carlos Marcello once again found himself on the wrong side of the law for the sale of 10kg of marijuana in 1938.

Carlos Marcello was then arrested and charged with a fine of $76,830 and a prison term. Nonetheless, Carlos Marcello was released after serving just ten months of his sentence. With crime now being his habit, Marcello got into the circles of Frank Costello, the boss of the Genovese crime family in New York City. Costello was engaged in the illegal transportation of slot machines from New York City to New Orleans, and Marcello helped in getting those machines into the local businesses.

Carlos Marcello gained lots of power through his criminal deeds and was able to take over the illegal gambling unit in Louisiana in 1947. During this time, Carlos Marcello also collaborated with New York Mob associate, Meyer Lansky. This was to enable him to have money from the big casinos in New Orleans. After the deportation of Sylvester “Silver Dollar Sam” to Sicily, Carlos Marcello as selected as his successor “The Godfather” of the New Orleans Mafia by the National Crime Syndicate and the capos. Carlos Marcello would hold this position for three decades perpetrating crimes. During his takeover, Carlos Marcello preserved the syndicate'stradition of being independent of any crime unit in other areas. Carlos Marcello also initiated a policy that ensured their territories of operations is free from any intrusion from other Mafiosi and any member from other units needed permission before entering Louisiana.

Deportation And Other Charges

Carlos Marcello was forcibly deported to Guatemala on April 4, 1961, after his arrest while making a routine visit to the immigration authorities in New Orleans. Carlos Marcello was, however, able to find his way back to New Orleans within two months. Hiring an immigration lawyer, David Carliner, Carlos Marcello challenged all other deportation efforts made by the government. In about two year time, Carlos Marcello was tried for "conspiracy to obstruct the United States government in the exercise of its right to deport him and "conspiracy to defraud the United States government by obtaining a false Guatemalan birth certificate" but was acquitted on both charges. Another charge of "conspiring to obstruct justice by fixing a juror, Rudolph Heitler, and seeking the murder of a government witness, Carl Noll" was made against him in November 1963. With this charge, his lawyer admitted to the bribery of Heitler but noted it there was no evidence to trace it to Carlos Marcello. This time again, he was left off the hook, and all charges dropped.

In 1966, Carlos Marcello was charged with assaulting an FBI agent and was given a two-year sentence but actually served less than six months. Carlos Marcello along with a former commissioner of administration to Governor Edwin Edwards, Charles E. Roemer and a former aide to Governor John J. McKeithen, Aubrey W. Young, and two others were in 1981indicted for conspiracy, racketeering and mail and wire frauds for plotting to bribe state officials to gain a multimillion-dollar insurance contract. The U.S District Court for the Eastern District of Louisiana in New Orleans indicted them after the FBI conducted the probe known as BriLab.Young and the two others were acquitted, but Carlos Marcello and Charles Roemer were convicted. Marcello has been connected to the death of President John F. Kennedy in diverse ways although there is no concrete evidence of his connections. Nonetheless, there are several schools of thoughts that he masterminded the assassination.

Carlos Marcello suffered series of strokes in 1989 while serving his term in prison. He was released in October that year after serving six years and six months of his jail term and left in the care of his family. After his release, he told reporters that "I’m retired," "I’m happy. Everybody’s been nice to me." He spent his last years in his two-story mansion white marble house in New Orleans. A group of nurses cared for him with supervision from his wife and other family members. Marcelo died on March 2, 1993.