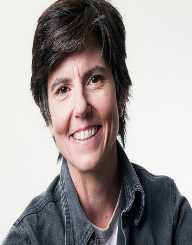 Mathilde O’Callaghan Notaro was born 24th March 1971, to Pat and Mathilde Notaro. She was born in Jackson, Mississippi, in the United States. Notaro is one of two children, and she has an older brother.

During the 1990s, Notaro relocated to Denver, in Colorado. She worked in the music industry, managing bands through her company, Tignation Promotions.

Notaro then moved to Los Angeles in the late 1990s, and she debuted on the stage doing stand-up comedy.

Before long, Notaro featured on television in several comedy shows. In 2011, she began a podcast called Professor Blastoff. Notaro delivered the podcast with her writing partner Kyle Dunnigan, and David Huntsberger and the podcast finished in 2015.

In 2011, Notaro released her debut album, Good One.

During the years that followed, Notaro continued to perform. As a result, she regularly appeared on television. HBO aired her first comedy special in 2015, called, Tig Notaro: Boyish Girl Interrupted.

In 2018, Notaro won a part in season two of Star Trek: Discovery. She also released her second one-hour special, Happy To Be Here, on Netflix.  Notaro has released four albums, three videos, and two compilation albums.

As well as all her other work, Notaro has performed on countless radio shows.

Notaro married Stephanie Allynne in 2015. The couple met on the set of a movie. They had twins in 2016, via surrogacy.

In July 2012, Notaro contracted breast cancer. As a result, she had a double mastectomy, but she decided not to have chemotherapy.