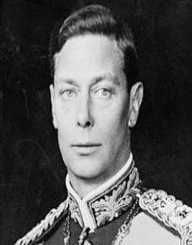 George VI, born Albert Frederick Arthur George was the King of the United Kingdom from December 11, 1936, to 1952 when he died. Born on December 14, 1895, he added as the ruler of the Dominions of the British Commonwealth, first Head of the Commonwealth and the last Emperor of India. He was the second child of King George V. Being a second child, ascending to the throne was highly unlikely since it was the first child that inheritedit.

George VI's fortunes however changed when his elder brother King Edward VIII who succeeded their father in 1936 decided to abdicate the throne. Edward had decided to marry divorced American socialite Wallis Simpson, and for political and religious reasons, he had to abdicate the throne to do that. George, therefore, succeeded his brother as the third monarch of the House of Windsor. It was during his reign that several countries under the rule of the British Empire gained independence. His daughter Elizabeth II succeeded him after his death.

Albert Frederick Arthur George was born on December 14, 1895, at York Cottage in Norfolk, during Queen Victoria’s reign. He was the second child of Prince George, Duke of York (later King George V) and Duchess of York (then Queen Mary). He became known as Bertie within the family. Albert was a stammer and had frail health as a child. He was also forced to write with the right hand despite been a naturally left-handed.

Albert received education from the Royal Naval College, Osborne as a naval cadet in 1909. Despite being last in the final exams, he made it to the Naval College, Dartmouth. When his father ascended the throne as King George V, he became second in line to the throne after his brother. On September 15, 1913, he was ranked midshipman aboard HMS Collingwood. Albert was appointed to the Royal Naval Air Service’s training facility in Cranwell as Officer in Charge of Boys in February 1918.

Three months later, he moved to the Royal Air Force. He served several other positions and was the first member of the royal family to become a fully certified pilot. He enrolled at Trinity College, Cambridge in October 1919 to study economics, history and civic. His father created him Duke of York, Baron Killarney and Earl of Inverness on June 4, 1920, and since then he started taking up more royal duties.

After the death of King George V on January 20, 1936, Albert’s elder brother, Prince Edward inherited the throne as King Edward VIII. However, in less than a year on the throne, Edward decided to abdicate the throne to marry the two-time divorced American socialite Willis Simpson. Edward was given the options of choosing between to be a king or marrying Simpson and he decided the later. He abdicated on December 11, 1936; hence, Albert succeeded him as King George VI.

King George VI took over the throne at a period where the confidence of the people in the monarch has dropped significantly. The parliament of the Irish Free State had on the day of Edward’s abdication removed all direct mention of the monarch from the Irish constitution and passed the External Relation Act the following day. This limited the authority of the monarch in Ireland. His coronation was held at Westminster Abbey on May 12, 1937. In about two years into his reign, in September 1939, Britain and the other self-governing Dominions aside Ireland declared war on Nazi Germany. The royal family had almost the same treatment as the citizens during the war to show some level of empathy to their plight.

George VI's reign also witnessed an increased call for independence from various colonies, and this even heightened after the World War II. This led to the gradual transformation of the empire into Commonwealth, an association of independent states formerly under the British rule. He became the last emperor of India after the sub-continent was partitioned into India and Pakistan in 1947. He instead took up the title King of India and Pakistan. He also relinquished the title of King of India in 1950 after the country became a republic in 1950 but remained king of Pakistan until his death. He then assumed the title Head of the Commonwealth.

King George VI was a stammer and was therefore not comfortable in giving public speeches. Around 1925, he started seeing speech therapist Lionel Logue, through which his speech improved significantly. Since Albert was unlikely to ascend the throne, he had the freedom to choose his wife, unlike the norm where royals were expected to marry from a royal family. On April 26, 1923, he married Lady Elizabeth Bowes-Lyon, the youngest daughter of the Earl and Countess of Strathmore and Kinghome. They had two children Elizabeth ("Lilibet" now Queen Elizabeth II)and Margaret.

Ascending the throne as King George VI, administration pressure coupled with his heavy smoking had a toll on his health. He had lung cancer, arteriosclerosis, and Buerger’s disease. George VI died in his sleep on February 6, 1952, at Sandringham House in Norfolk. He was 56. His daughter Queen Elizabeth II succeeded him. George IV first buried at the Royal Vault and on March 26, 1969, moved to the King George VI Memorial Chapel inside St. George's.