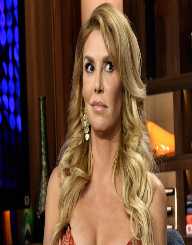 Brandy Glanville was born on the 16th of November 1972 in Monterey California. Her parents were Guy Glanville and JudithSwinehart. She was the second of three children.

The former model began her career as a model at the age of sixteen. She was signed by the Elite Model Management agency. Brandi moved to Paris but she worked all over. She traveled from Europe to Los Angeles to New York. She appeared in magazines like the Cosmopolitan and Glamour magazines. She soon started to walk on the Paris runway shows. She also worked for fashion and design houses like Chanel, Gucci, and Giorgio Armani.

She was a model for seventeen years until she transcended from being a model to a celebrity house wife and then a television personality. Her rise to the mainstream media came with her entry into the show Real Housewives of Beverly Hills. She began as a friend of the housewives in the second season. Brandi joined fully in the third season in 2010 after it was announced that Camille Grammer would not be returning to the show. She was with the Real House Wives of Beverly Hills from the third season to the fifth season. She left the show in 2015. Afterwards, she made an appearance in the season seven of the Celebrity Apprentice in 2015. She stayed on until the final four but she did not make it till the end.

In 2016 she participated in the reality show Famously Single. She also appeared on the Eric Andre Show. As at 2017 she had begun competing in the Fox reality series My Kitchen Rules. She also hosts her own Podcast which she has titled; Brandi Glanville: Unfiltered

She has similarly dabbled a bit in acting. She played herself in an episode of 90210 in 2013. In the same year, she also appeared as Erica in the movie Missing at 17. She appeared in the Hungover Games film in the year 2014. She played a housewife named Veronica.

The former model married and became the housewife of actor and celebrity Eddie Cibrian in 2001. They stayed married until 2010 when they divorced due to infidelity on the part of her husband.

The first controversy the former model and television personality, Brandi Glanville was known for was her divorce from her husband. He had cheated on the marriage consistently and finally left her for county singer LeAnn Rimes. The divorce was a very public one. There has been hostility between the two women since that time. Very recently Brandi on her podcast stated that she was ready to put the past behind her. She claimed to have written a song for LeAnn Rimes who she said was not doing so well anymore. It seems the statement was still born out of the hostility that is yet to be spent.

Brandi consistently got into feuds with fellow members of the Real House Wives of Beverly Hills reality television show while she was on it. Her feud with Kyle Richards was the most notorious. She was also once accused of racism when she made a comment about Joyce Giraud, an African American member of the show. She had said that Joyce Giraud could not swim because she was black. Brandi apologized for this statement, saying that she never meant to seem racist.