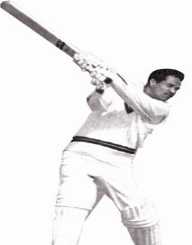 Gary Sobers is a former cricketer from West Indies who is considered the greatest all-rounder of all-time. He batted and bowled left-handed. During his extraordinary career, he set up multiple world records that could only be broken decades later. He also captained the international cricket team from West Indies in 39 games.

Gary Sobers was born to Shamont and Thelma Sobers on July 28, 1936. His birthplace is Bridgetown, Barbados. His parents had six children – he was the second youngest child. When Sobers was six years old, his father was killed when his ship was attacked by a German undersea boat. Sobers was born with extra fingers, but he cut them off himself.

Gary Sobers went to primary school at Bay St. school Barbados. He was very athletic and played many sports like cricket, football, and basketball.
By the age 13, he had picked his favorite sport and was already known as an incredibly talented young cricketer. He was initially recruited to play as a bowler, but soon his batting skills caught the eye of the coaches, and he was being used as a batsman up the order.

Gary Sobers had an early first-class debut. He was only 16 years old when he played his first first-class game against India at Kensington Oval, Bristol. His bowling skills came into the limelight as he took seven wickets in his first match.

After some modest performances, at the age of 17, Gary Sobers was selected in the international team of the West Indies. His first international game was against England at Sabina Park in Kingston Jamaica. In this game, he showed excellent skills as a medium pace bowler. For the next three years, he played in several test series against top cricketing nations like Australia, New Zealand, and England.

Gary Sobers' good performances established his reputation as a talented youngster who could be turned into a great cricketer. His batting skills were recognized in 1957 at the Oval. He scored 39 and 42 in consecutive innings when his entire team was bowled out for 89 and 86.

Gary Sobers was promoted up the order, and his batting talent started to shine. Against Pakistan in 1958, he scored an unbeaten 365 – the world record for the highest individual test score in an innings. This record was only broken in 1994 when Brian Lara made 375.

Gary Sobers was made the captain of the West Indies cricket team in 1964. He achieved instant success and brought home the series cup with victory 2-1. He then went on to win against India and England. In 1967, Sobers’ captaincy came under the radar. When trying to win a match vs. England, Sobers declared early to force a result. West Indies ended up losing a game that looked like a draw. He gave up captaincy a short while later.

Gary Sobers was selected to be the captain of the Rest of the World XI team in 1970 vs. England and 1972 vs. Australia. He also took part in county championships, English leagues, and other games.As one-day cricket was only in its beginning stages at the time, Sobers played just one ODI in 1973. He took one wicket in the match.

Gary Sobers is the first cricketer to hit six sixes in an over in first-class cricket. He hit Malcolm Nash who played for Glamorgan.

Sobers retired in 1974, as the record holder for most runs in test cricket. He was knighted in the year 1975 and became the Wisden cricketer of the century in 2000.

In 1966 while touring India, Gary Sobers started dating actress Anju Mahendru. They were engaged for a short period.

In 1969, Gary Sobers married Prue Kirby from Australia. They had two sons together – Matthew and Daniel and adopted a daughter named Genevieve. They divorced each other in 1990 after remaining separated for six years.