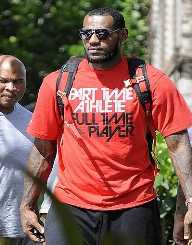 LeBron James is an American basketball player, he currently plays for the Cleveland Cavaliers.

James was born on 30 December 1984 in Akron, Ohio. James did not know his father growing up and was raised by his sixteen year old mother, Gloria Marie James. They had to move repeatedly when LeBron was a child as his mother struggled to hold down a job and raise LeBron alone. At age nine James moved in with the family of his football coach Frankie Walker. It was Walker who introduced James to basketball. James played for the Northeast Ohio Shooting Stars and enjoyed great success. He rose to national attention for his basketball displays in high school and entered the NBA draft in 2003 draft aged just 18.

James attended the Catholic private school St. Vincent-St. Mary High School. The school, nicknamed the ‘Fighting Irish’, were highly successful in sports. In James’ first year there the varsity team went 27-0. James averaged 21 points a game in his freshman year. In his second year, his average rose to 25 points a game. Both years the Fighting Irish won the Division III state title. James was also selected on the USA Today All USA First Team, making him the first sophomore to do so. During his Junior year, James became the first high school basketball underclassman to appear on the cover of Sports Illustrated. St. Vincent-St Mary finished the 2002 season 23-4 losing the Division II state final.

James petitioned the NBA to change the draft rules that required players at least graduated from high school before they declared for the draft. His petition was unsuccessful. By the time of his senior year, James was a national star. The Fighting Irish traveled to play nationally ranked teams and Time Warner offered their games on pay-per-view. St. Vincent-St. Mary won the Division II state title and James averaged 31.6 points and 9.6 rebounds per game. James also made the USA Today All USA First Team for a third time and was named Gatorade National Player of the Year for the second time. James declared he would enter the 2003 NBA draft. While in high school James also represented the Fighting Irish at football. He played wide receiver and a number of colleges attempted to recruit James, including Notre Dame.

James was picked number one overall in the 2003 NBA Draft by the Cleveland Cavaliers. James made his debut against Sacramento Kings and broke the scoring record for high school draftee debuts with 25 points. With James on the team, the Cavaliers had an 18 game improvement on the previous year finishing 35-47 but failed to make the playoffs. James won the Rookie of the Year award, making him the youngest player ever to do so. In 2004 James won bronze at the Olympic Games with team USA. In his second season, James helped the Cavaliers to a winning record 42 – 40. James also became the youngest player to drop 50 points in a game when he scored 56 points against the Toronto Raptors.

The next year James led the Cavaliers to the playoffs for the first time since 1998. They defeated the Washington Wizards in the first round. They were eliminated by the Detroit Pistons, losing in game seven. The Cavaliers again made it to the playoffs in 2007 off the back of a 50 win season. They swept Washington in the first round, defeated New Jersey Nets in next round before avenging the previous year’s defeat to the Pistons in the Conference Finals. In his first NBA finals James faced the San Antonio Spurs, James averaged 22 points, 7 rebounds, and 6.8 assists in the final but could not prevent the Cavs being swept.

The next year James won his first scoring title with a 30 points a game average. The Cavaliers again made the playoffs but were defeated by eventual champions the Boston Celtics in the Conference Semis, James scored 45 points in the decisive game seven. James also became the top scorer in Cavalier franchise history. James appeared in his second Olympic Games in 2008 with the USA basketball team that took gold in Beijing. James finished the 2009 playoffs with an average of 38.5 points 8.3 rebounds and 8 assists per game but could not prevent the Cavs being beaten in six games by the Orlando Magic in the Conference Finals. James did manage to claim his first MVP title. He retained the MVP award the next season as the Cavaliers once again came up short in the playoffs losing to the Boston Celtics.

After the 2010 playoffs, James became an unrestricted free agent and he joined the Miami Heat in very public and controversial manner. In Miami, James formed part of the ‘Big Three with Dwayne Wade and Chris Bosh. With his new team, James returned to the NBA finals but was again denied the title, this time by the Dallas Mavericks. James received the brunt of the criticism for the loss as his performances in the playoffs and in particular in the 4th quarter of games showed a marked drop of in performance. 2012 marked the year James finally got his hands on an NBA title as the Heat beat Oklahoma City 4-1 in the finals. The Heat would retain the title in 2013 by beating the San Antonio Spurs in seven games. In between the two finals wins James also picked up a second Olympic gold medal. 2013 also saw James become the youngest player to reach 20,000 career points at 28. The Heat reached a fourth straight final in 2014 but were defeated by the Spurs 4-1. After the defeat, James opted out of his contract with the now injury-ravaged Heat. He then announced he would be returning to his home team the Cleveland Cavaliers.

With the Cavs James made it to his fifth straight finals were they faced the Golden State Warriors. James was without the support of Kevin Love and Kyrie Irving for the finals as the Warriors defeated the Cavs 4-2. The next year the Cavs stormed back to the finals, making James the first man since the 1960s to reach six straight NBA finals. Again they came up against the Golden State Warriors, but the despite going 3-1 down the Cavs recovered to take the title. This was the Cavaliers first title ever. James became the youngest player to score 28,000 points on 4 February 2017.

James married his long-time girlfriend Savannah Brinson in September 2014. The two met in high school and have three children together, LeBronjr., Bryce Maximus, and Zhuri.

LeBron began using marijuana in high school to deal with the stress of the national attention he was receiving. He was also suspended for two games for accepting clothing from a store in return for doing a photo shoot, this violated high school athletics rules regarding amateurism.

James founded the Lebron James Family Foundation in 2004. The foundation helps single-parent families. James is also a supporter of a number of other children’s charities. James has also reached a deal to provide 2,300 scholarships to the University of Akron. James also donated money for the building of a new gymnasium at his old high school which was then named in his honor.