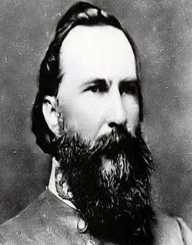 James Longstreet was born on 8th January 1821, to James and Mary Longstreet. He was born in South Carolina, in the United States, in Edgefield. He was one of five children in the Longstreet family, and his parents owned a cotton plantation.

Longstreet’s father decided that his son would have a military career. He also thought that the local education was not up to standard in preparing his son for a military academy, so at nine years of age, Longstreet went to live with his aunt and uncle in Georgia.

James Longstreet studied at the Academy of Richmond County and lived with relatives for eight years. During this period, in 1833, Longstreet’s father died from cholera while he was paying a visit. His mother and siblings then moved to Alabama, but Longstreet continued to live with his uncle, Augustus.

Augustus tried to secure an appointment for Longstreet at the United States Military Academy in 1837, but the vacancies for their district were full. In 1838, Longstreet acquired his placement through a relative from Alabama where his mother was living.

His academic grades were abysmal, and he finished 54th out of 56 students when he graduated four years later. Despite this, he made several good friends who would go on to become prominent players in the Civil War. Longstreet received the commission of brevet second lieutenant upon graduation.

James Longstreet spent his first two years of service at Jefferson Barracks in Missouri. He was under the command of Lieutenant Colonel John Garland. One of his friends from the academy, Lieutenant Ulysses Grant, joined him in 1843.

The following year, in 1844, the regiment moved to Louisiana. In 1845, James Longstreet was promoted to the second lieutenant and was transferred to an infantry unit stationed in Florida. From Florida, the regiment was moved to Texas.

Longstreet’s next major career move was in the American Civil War. Longstreet had been born in South Carolina and grew up in Georgia, but due to his appointment at West Point being secured by a relative from Alabama, and with his mother still living there, he decided to take the Confederate’s side in the looming war.

As James Longstreet was the senior Academy graduate from Alabama, he expected a rank suitable for his standing. In May 1861, he resigned from the U.S. Army and joined the Confederate States Army as a lieutenant colonel. After meeting with Confederate President Jefferson Davis in June of the same year, he was appointed the rank of brigadier general, which he accepted. He was given command of three Virginian regiments.

James Longstreet and his men went into battle on 18th July, and then joined the First Battle of Bull Run later in July, which was the first major battle in the civil war. In October 1861, Longstreet was promoted to major general. The army had been reorganized and was now called the Confederate Army of Northern Virginia, and Longstreet was in command of one of the divisions.

In 1862, Longstreet had personal tragedy when a scarlet fever epidemic went through Richmond, Virginia, and three of his children died.

Longstreet continued to go into battle with his troops, and by late June, he commanded nearly half of the army, 15 brigades in total. James Longstreet became the righthand-man of General Lee. He was a well-respected soldier, and he led by example. James Longstreet was known for the execution of defensive strategies and tactics. He did, however, disobey Lee. On 29th August when Longstreet arrived with his men, he disagreed with Lee’s strategy and didn’t send his men into battle.

The next two days were said to be the best of Longstreet’s performances during the war, despite being criticized for disobeying Lee. He continued to star in battles that ensued over the remainder of 1862, and he was promoted to lieutenant general in October. Longstreet was now in command of 41,000 men.

James Longstreet was instrumental in battles that included the Battle of Fredericksburg, and in Suffolk, Virginia, was able to win a battle that enabled the Confederates to take control of large amounts of provisions from the Union Army. After the death of Stonewall Jackson, the army was reorganized. Longstreet and Lee met to discuss tactics were moving forward. A spy forewarned Longstreet and the Confederates that the Union Army was advancing quicker than had been thought they would.

In August 1863, James Longstreet petitioned various politicians to be transferred to the Western Theater. He continued to fight with his troops, and he continued to draw criticism for the slow manner in which he proceeded. After unsuccessful battles, in May 1864, James Longstreet fought again with Lee’s army, and played an instrumental role in the Confederates winning the Battle of the Wilderness.

Due to an injury in the battle, James Longstreet was taken out of action for the rest of 1864. He recuperated at his cousin’s in Augusta, Georgia. He rejoined the fight with Lee in October 1864, but he suffered paralysis in his right arm. The war finished not long after, in 1865.

James Longstreet and his family settled in New Orleans after the war. He became a partner in a cotton brokerage, and he also became president of an insurance company.

Longstreet sought a pardon which was not given at the time, but his American citizenship was restored in June 1868. When Grant became president in 1868, Longstreet was offered the position of Surveyor of Customs in New Orleans. In 1872 he was appointed major general in control of all police and militia in the city of New Orleans.

In 1875, Longstreet and his family moved to Gainesville in Georgia. There were concerns for their safety in New Orleans due to controversy and fighting that had taken place and Longstreet’s role.

Longstreet semi-retired to a farm near Gainesville. He planted vineyards and orchards, and he raised turkeys. In April 1889, a fire burned his house to the ground, and Longstreet lost many of his possessions. In December that same year, his wife died.

In 1896, James Longstreet released his autobiography, From Manassas to Appomattox.

Longstreet’s health declined over his remaining years, and he died from pneumonia on 2nd January 1904.

After the death of his wife, in 1897, Longstreet married Helen Dortch, 42 years his junior. His children didn’t react well to the marriage, but Dortch was a devoted wife.

James Longstreet is remembered through various places being named after him. These include Longstreet Bridge, and a monument at Gettysburg National Military Park.

There is also the Longstreet Society in Gainesville which is dedicated to the study of his life and career.