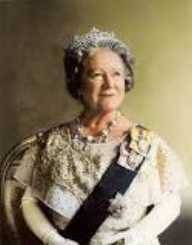 She was known for providing moral support to the British public during the time of World War II. Elizabeth had an active social life and continued to make public appearances until a few months before her death. She earned the moniker “Smiling Duchess” for her joyful demeanor and high spirits.

The Queen was born as Elizabeth Angela Marguerite Bowes-Lyon on August 4, 1900, into a family of British peerage. Elizabeth received education at home before joining a school, where she excelled in literature. When she was only 13, she passed the Oxford Local Examination under the OCR board with flying colors. A year later, World War 1 began.

Elizabeth was at the forefront of tending to wounded soldiers as her childhood home, the Glamis Castle, became a temporary nursing abode. She lost her elder brother Captain Fergus Bowes-Lyon to the war.

After rejecting Prince Albert’s proposal twice, Elizabeth finally overcame her apprehension of living a royal life and agreed to marry him. The prince marrying a daughter of a peer was seen as a modern political gesture at that time.

The couple married on April 26, 1923, at Westminster Abbey, and Elizabeth became the Duchess of York. For the next 10 years, the Duke and Duchess toured many places, including several countries in East Africa, Australia, New Zealand, Fiji, etc.

In 1936, Albert’s father, King George V, passed away, and his brother Edward took over the throne as King Edward VIII. But Edward had other plans in mind. He fell in love with an American socialite Wallis Simpson and was hell-bent in marrying her. Simpson was a divorcee, and this gave rise to a constitutional crisis because, as a king,

Edward was not allowed to do so. The Church of England did not allow divorcees to remarry. Thus, it was evident that the ministers and the people would not accept Simpson as a queen. Edward married Simpson and consequently renounced the throne, making Albert the King under the name of George VI. Elizabeth became the Queen consort of the newly crowned King.

As King and Queen, the couple made several state visits and royal tours, most notably to France, the United States, and Canada. A few years later, World War II shook the world. Elizabeth stayed in London, even when the bombing took place.

She visited the soldiers, hospitals, and the affected areas. She sponsored the book The Queen's Book of the Red Cross to raise funds for the Red Cross. Elizabeth’s popularity and her efforts during wartime made Hitler uncomfortable.

However, her health conditions hindered the royal tours. She was diagnosed with colon cancer in 1966 and with breast cancer in 1984. Both operations were successful.

Queen Elizabeth subsequently had eye operations, hip replacement surgery, blood transfusion due to anemia, etc. Her 100th birthday was celebrated with a fancy parade, and she was commemorated with the issuance of a special £20 note that had her image on it. Elizabeth died of natural causes on March 30, 2002.