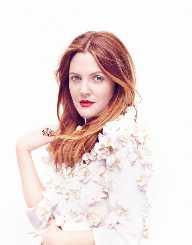 Drew Barrymore was born on February 22nd, 1975 in Culver City, California. When she was only seven years old, she earned herself a large following after featuring in E.T.: The Extraterrestrial. When she was young, he went through a couple of challenges which contributed to her substance abuse. This tarnished her career for several years. Nonetheless, she went through a major comeback after establishing the Flower Films in 1995.

Drew Blythe Barrymore was born on February 22nd, in 1975. Her father John Barrymore was also a professional actor. Her mother’s name was Jaid. In 1984, Drew’s parents separated. She was only nine years old when this happened. Born into an acting family, the Barrymores, Drew also followed the same path. Her great-grandparents were also actors back in the day with the likes of Maurice Barrymore, Georgie Drew Barrymore, and John Barrymore.

Professionally, Drew Barrymore began acting before turning one year old. When she was 11 years old, she was part of an audition for a TV commercial. She won the dog commercial by having a smile on her face. In 1980, she made her first film appearance in the Altered States while playing the small role of Margaret Jessup. This was followed by her role in E.T. the Extra-Terrestrial while playing Gertie. Steven Spielberg directed this film. The film was an instant hit, and it went on to become the highest-grossing movie during the 1980s. After featuring in this film, young, beautiful and talented Barrymore was recognized as the most celebrated child stars of the 80s. She was bestowed with a Young Artist Award for featuring in the movie .

Afterwards, Barrymore featured in Firestarter – 1984. During the same year, she was included as a cast in the film Irreconcilable Differences. In this film, she was playing the role of a young girl going through challenges with her parents and had to divorce them. Her notable performance earned her recognition as part of the Golden Globe nominees for Best Supporting Actress. The following year, she was also nominated for Young Artist Award for the role she played in Cat's Eye – 1985. Other films she featured in during the late 80s are See You in the Morning – 1989 and Far from Home – 1989.

When Barrymore was in her mid-teens, she had to fight drugs and alcohol issues that she was going through. This was attributed to her mother’s influence when she accompanied her to nightclubs. At the age of 13, Barrymore had grown violent and was rehabilitated for a short period. Her wild reputation was taken advantage of by film and TV producers as it influenced the roles she played. For example, she featured in Poison Ivy – 1992 and Guncrazy – 1992.
Her alcohol and substance abuse also led to her first marriage to Jeremy Thomas, a bar owner. She was only 19 years old when she wedded for the first time. This relationship was short-lived as it came to an end in less than three months. Her wanting behavior also came to questioning after posing nude for Playboy and other shows on TV.

In spite of the tarnished image that Barrymore had acquired, tables changed in 1995 after establishing her own production company called Flower Films. The first film that brought her back to the public eye was the 1995 film Boys on the Side. In this film, she played alongside Mary-Louise Parker and Whoopi Goldberg. The following year, she cast as Casey Becker in the remarkable horror film Scream. Three years later, in 1998, she proved to the world that she could also feature in romantic films. She starred with Adam Sandler in the highly acclaimed romantic film The Wedding Singer. She also worked on producing in 1999 which earned her credits for her excellent job.

Barrymore helped in the production of Never Been Kissed- 1999 and was also part of the cast as Josie Geller. The next big-screen hit for her came in 2000 after featuring in Charlie's Angels. She acted alongside other movie icons such as Cameron Diaz, Bill Murray, and Lucy Liu. The film was a commercial success as it grossed over $40 million during its opening weekend.

Drew Barrymore was involved in several romantic relationships after separating from her first husband in 1994. First, she got engaged to Tom Green in 2000, and their relationship lasted for months before ending. Later on, she dated Fabrizio Moretti and Justin Long. In 2012, she got married to Will Kopelman. The same year, the couple had their first child named Olive Barrymore Kopelman. Two years later, they welcomed their second-born daughter, Frankie Barrymore Kopelman. The couple separated in 2016.