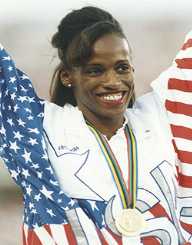 Jackie Joyner-Kersee was born on March 3rd, 1962. Her place of birth was in East St. Louis, Illinois. She is a respected retired American field and track athlete. With her exceptional talent, she went on to win several medals in 4 varying Olympic Games. This made her gain the classification as one of the greatest athletes in both the long jump and heptathlon. Part of her worldwide fame is for the reason that she was the first American woman to bag home a gold medal in long jump. In addition to this, she set a world record for being the first woman to hit over 7, 000 points in heptathlon sports.

Jackie Joyner-Kersee was born on March 3rd, 1962. Her parents gave her the name of the wife to the 35th president of America, Jacqueline Kennedy. Right from the time Joyner-Kersee was young, she showed her love for sports. She was majorly involved in sports while she attended the East St. Louis Lincoln Senior High School. She was a four-year winner of the National Junior Pentathlon competitions held while she was still a teenager. In school, she was hailed for being skilled in some sports including basketball, volleyball, and track. She went on to perform well in long jumps as she set a record for her high school hitting 6.68 meters.

After finishing her high school learning, Joyner-Kersee went to the University of California located in Los Angeles. At the university, she also gained high recognition for her energy and contribution outside class. Soon, Joyner-Kersee realized that she could compete at the Olympics. She was only 19 years old when she decided to focus on her sports career. The main sport that she would compete on was heptathlon. This is a kind of sport involving some events to be competed on including 100-meter hurdles, 200-meter run, and 800-meter run. Joyner-Kersee believed that she was gifted in this sport. In 1985, she successfully graduated from the University of California.

After deciding to go pro, Joyner-Kersee participated in the 1984 Olympic competitions where she bagged home a silver medal. Two years later while contesting in the Goodwill Games, she scored more than 7, 000 points in the heptathlon. This was a record that gave her the recognition as the first woman to hit that target. In 1988, she fought for her heptathlon title in the Olympic Games where she emerged victoriously. She won a gold medal in the sport. She also won gold in the long jump. She still holds the heptathlon record of 7,291 points that she set in 1988 Olympic Games held in Seoul, South Korea.

In 1996, Joyner-Kersee was involved in the Olympics competitions for the last time. During this period, she won a bronze medal while competing in long jump. Unfortunately, she suffered hamstring injury at the heptathlon trials which later meant that she could not participate in the competitions. This injury affected her performance in the long jump, but she emerged victorious in her last jump of 7 meters which boosted her points to win bronze.

In 1986, Joyner-Kersee wedded Bobby Kersee who was her track coach. After hanging her career boots from track and field at the age of thirty-eight, Joyner-Kersee turned to nurturing young talent by establishing the Jackie Joyner-Kersee Youth Center Foundation. This foundation was meant to help the youth more so the disadvantaged in engaging in sports. In 2012, she became a board member of USA Track & Field group.