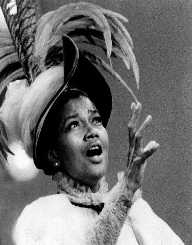 Pearl Bailey was born on March 29, 1918, in Newport News, Virginia, USA. Her parents were Ella Mae and Joseph Bailey.

Around 1979, Pearl Bailey returned to school. She later earned a bachelor’s degree in theology in 1985.

Pearl Bailey first began acting on Broadway in the mid-1940’s. Her first Broadway role was as a Butterfly in St. Louis Woman in 1946. She then went on to act in the place Inside USA in 1948. In the 1950’s, Bailey performed in several more Broadway productions, including Arms and the Girl, Bless You All, and House of Flowers.

In the 1960’s, Bailey’s theater career was not very productive. However, she did appear in an off-Broadway production of Les Poupees De Paris and Call me Madam.

In the 1970’s, Pearl Bailey would go on to perform in one of her most famous roles as Mrs. Dolly Gallagher Levi in a Broadway production of Hello, Dolly!

Pearl Bailey appeared in her first film, Isn’t It Romantic, in 1948. Before this, she was already an established stage actress, so it did not take long for her screen acting career to kick off. Bailey’s next film, Carmen Jones, was produced in 1954. She appeared in her first television episode, in the show As the World Turns, in the same year. Also in the 1950’s, she had roles in the films That Certain Feeling, St. Louis Blues, and Porgy and Bess.

Pearl Bailey did not screen act much in the 1960’s. She only appeared in one film (All the Fine Young Cannibals) and one episode of a television show (ABC Stage 67). Bailey’s screen acting career picked up slightly in the 1970’s. She appeared in the live-action movies The Landlord and Norman, Is That You? And she took on a voice acting role in the animated film Tubby the Tuba. She also had guest roles in the television shows The Love Boat and Love, American Style.

Pearl Bailey continued acting throughout the 1980’s. She mostly appeared in guest parts on television shows in this decade, including The Member of the Wedding, Silver Spoons, and ABC Afterschool Specials. She also had a role in the made-for-television movie Peter Gunn, and she had a voice acting role in the Disney animated movie The Fox and the Hound.

Pearl Bailey’s professional singing career began in 1950, when she released her first album, Pearl Bailey Entertains, in 1950. Her singing stylings caught on almost immediately, which only encouraged her to release more albums. Some of her albums from the 1950’s include Birth of the Blues, Around the World With Me, The One and Only Pearl Bailey Sings, and Pearl Bailey Sings for Adults Only.

Bailey’s singing career continued throughout the 1960’s, in 1971. Some of her most famous albums from this period include Happy Sounds, Les Poupees de Paris, The Risque World of Pearl Bailey, The Jazz Singer, After Hours, and Pearl’s Pearls.

In the late 1960’s, Pearl Bailey’s attention shifted to writing books, which were mostly autobiographical. All of her books were written between 1968 to 1989. Her most famous books are listed below.

The Raw Pearl
Talking to Myself
Pearl's Kitchen: An Extraordinary Cookbook
Between You and Me: A Heartfelt Memoir on Learning, Loving, and Living

Pearl Bailey has won several awards for her acting careers, her musical career, and her writing career. Some of her most impressive awards are listed below.

Pearl Bailey was first married to John Pinkett in 1948. However, this couple broke up in 1952. She married again to Louie Bellson in 1952. This couple had two adopted children together: DeeDee and Tony. This couple remained married until Bailey’s death.

Pearl Bailey died on August 17, 1990, in Philadelphia, Pennsylvania, USA. She was 72 years old when she passed away.