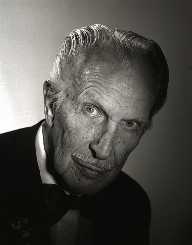 Vincent Leonard Price, Jr was born on May 27, 1911, in St. Louis, Missouri. Price is an American actor, voice-over artist, narrator and cookbook writer. Price is famous for his prominent roles in Hollywood where he starred in several horror movies. Vincent had an initial interest in art history but later converted into acting. Vincent's style of acting impressed the audience, and he was highly rated in the comedy and horror film genre. Price became notable when he acted in “Tales of Terror," an adaptation of Edgar Allan Poe's work. Price's perfect voice has been heard on different radio stations as his star in voice-overs and narrations. Vincent has received two stars on the Hollywood Walk of Fame for motion pictures and television.

Vincent Leonard Price was born and grew up in St Louis Missouri. At a young age, Vincent developed an interest in Arts and even enrolled to study fine arts. Vincent Leonard Price's acting passion overcame the arts interest, and he started acting. Vincent was the last born in a family of four children. His parents were Vincent Leonard, Sr, the president of the National Candy Company, and Marguerite Cobb. Vincent was raised up in a well-up family with the family owning several companies; the grandfather established "Dr. Price's Baking Powder" which guaranteed a fortune for his family.

Vincent Leonard Price went to school and while at the Yale University, he began working on a humor magazine The Yale Record. Vincent quickly drafted towards acting while at the University of London and made his first appearance in an act in 1934.

Enrolled at St Louis Country Day School. Vincent Leonard Price later joined the Yale University where he graduated from the University in 1933 with a degree in Art History.
Went to the University of London where Vincent intended to study his master's in Fine Arts. He was, however, more interested in acting than Fine Arts.

Vincent Leonard Price's acting career began in 1934 when he made his first theater appearance in London. Vincent performed in Orson Welles's Mercury Theater. His acting was received positively, and Vincent appeared in "Victoria Regina. " Vincent's star continually shone, and in 1938, he made a debut in the Hollywood. His role as the movie "Service de Luxe" gave him a lot of audiences. "Laura" catapulted him to be among the top actors of the industry. In 1939, Vincent tried his luck in the horror movies where he appeared as Boris Karloff in the "Tower of London" and later appeared in a science fiction horror movie "The Invisible Man Returns."

In 1944, Vincent Leonard Price starred in many films including "Wilson," a film whose theme was centered in President Woodrow Wilson's life, and "The Keys of the Kingdom" which was based on a novel titled the same. Vincent also did villainous in "Dragonwyck," and "Leave Her to Heaven" in 1946. In the following year, he did "The Web" and "The Long Night." Vincent Leonard Price afterward starred in "The Bribe."

In 1950, Vincent Leonard Price did his first significant role in "The Baron of Arizona" and also released his American comedy "Champagne for Caesar" which was a big success. Vincent appeared in "The House of Wax" in 1953 which was epic and unique as the first 3-D horror movie. In the same decade, he did "The Mad Magician," "The Fly" and "House on Haunted Hill."

Vincent Leonard Price's success in the horror industry was no longer a secret; consequently, 1960's saw him appearing in a series of horror movies including "House of Usher," "Tales of Terror," ‘The Tomb of Ligeia" and "Witchfinder General." In 1970, Vincent made an entrance in the radio industry with a horror "The Price of Fear" in BBC Radio. Vincent  had a superb voice that earned him more projects including Dr. Phibe's "Rises Again" and "Theatre of Blood."

In 1975, Vincent Leonard Price concentrated in narratives after a downward trend in the horror movie industry. Vincent, however, made a comeback two years later in a one-man play "Diversions and Delights" where he acted as "Oscar Wilde." This was phenomenal and is rated as one of his best performances.

In 1982, Vincent Leonard Price did several narrations in Tim Burton's "Vincent" as well as a monolog in Jackson's song "Thriller." Vincent also starred in a television production "Ruddigore" where he acted as "Sir Despard Murgatroyd." Vincent also acted in "Bloodbath at the House of Death." Vincent hosted a series in PBS Television "Mystery" as well as voicing "The 13 Ghosts of Scooby-Doo" and for Disney's "The Mouse Detective."I

Vincent Leonard Price and his second wife loved social work and helping the community. They donated a lot of artwork. They also made enormous contributions to East Los Angeles College to build Vincent Price Art Museum there. There help in the growth in art was evident by their numerous donations.

Vincent Leonard Price married three times in the course of his life. Vincent first married Edith Barrett, an actress, and they had a son named Vincent. He then married Mary Grant, and they got a daughter, Victoria, together. Vincent married his third wife Coral Browne who was an Australian actress.

He loved cooking, and he has written several cookbooks.

Vincent Leonard Price was a heavy smoker, and this caused him problems. Vincent suffered Parkinson's disease when growing up and the emphysema due to his smoking habit.
Vincent Leonard Price had lung cancer. He succumbed to the disease on October 25, 1993, while at his home in Los Angeles.