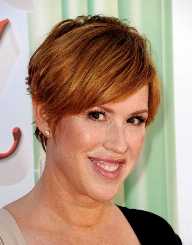 Molly Kathleen Ringwald is the daughter of the couple, Adele Edith and Robert Scot Ringwald. Her mother was a chef and father a blind pianist. She sang with her father in her childhood days.

Molly Ringwald studied at Lycee Francaise School in Los Angeles. She is outstanding in French having lived and worked in France for many years. Career John Hughes, the Director of series films for teens, gave her roles in many Series. “The Sixteen Candles” was a success. Molly played on the stage at the age of five in "Alice in the Wonderland.”

Ringwald started her career at an early age of ten in 1978 by participating in tv series. In 1980, in two albums she was a main vocalist. She also sang three devoted songs on another album. She acted in a film and was nominated for Golden Globe

Molly Ringwald got an Award in 1982 for her action in Tempest. Her roles in the movie Sixteen Candles in 1984, The Breakfast Club in 1985 were a commercial hit and brought her to the limelight. The reviews were effective. Her role as a girl who fights for love, and whose family had forgotten her sixteenth birthday, resulted in her being awarded the Yong Artist Award for Best Young Actress.

During the successive years,  Molly Ringwald acted in Pretty in Pink (1986) and was highlighted in the Time Magazine. Later she acted in the film, Pick-up Artist. The reviews were not good but moderate and mixed. The film was not a big success. Ringwald had a role in the movie, For Keeps, with average reviews but the film was a commercial success.

Ringwald moved to Paris in 1990 and starred in many French movies. She also participated in American movies, by returning home, now and then to the US. She also appeared on television during this period. In 1990, she had roles in Strike it Rich, Betsy’s wedding and Something to Live for: the Alison Gertz story (1992)

During the years, Molly Ringwald continued to act in several films, TV shows - the Strand (1994), Malicious (1995), ABC’s Townies, Remember WENN, Since You Have Been Gone (1999), How I Learned to Drive, and Judgement Day (2000). Her role in “Not Another Teen Movie” got an MTV Award Nomination.

She was cast in NBC sitcom The Facts of Life.

In 2014  Molly Ringwald turned to writing in The Guardian about family matters viz love, family and life. Personal Life

Molly Ringwald married Valery Lameignere, a French Writer in 1999 and separated in 2002 and married Panio Gianopoulos in 2007. He is a writer and book editor. The couple has three children, a daughter Mathilda (2003) and twins, Adele and Roman born in 2009.

The Secret Life of the American Teenager reflects her pregnancy. Ringwald wanted to be a good model for teenagers and fans. She has acted in 34 films, 24 TV shows.