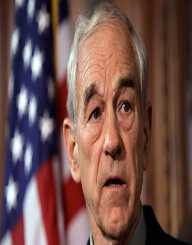 Ron Paul is a US politician of the Republican Party and has served in the House of Representatives for Texas State. Before turning to politics, he started his career as a physician – a gynecologist and later as a flight surgeon in the Air Force.

Paul is known for his open criticism of the fiscal policies of the Federal government and the War on Drugs. Paul has a deep love for economics and has written several books on the subject.

Ron Paul was born on August 20, 1935, in Pittsburgh, Pennsylvania, U.S.A. His full name is Ronald Earnest Paul, and his star sign is Leo. His father Howard Casper Paul, a dairy farmer and mother Margaret had five sons. As a child, Paul helped his father in running the family’s dairy business.

Ron Paul went to the Dormont High School for his early education. He then went to the Gettysburg College from where he graduated in 1957. He majored in Biology. To further his education he went to the Duke University’s School of Medicine and earned his doctorate in 1961. He chose gynecology as his specialization and interned at the Henry Ford Hospital.

Ron Paul started his career as a flight surgeon in the US Air Force where he served for two years (1963-65). He then did the same duty in the US Air National Guard for three years.  He then started practicing as a gynecologist. While working as a doctor, he delivered more than 4000 babies in his career.

Being an avid reader, Ron Paul developed a keen interest in economics. His friendship with economists Hans Senholz & Murray Rothbard also helped in bringing forward the economist in Ron Paul. After deeply studying economics politics, Paul decided to change his career and become a politician. He became a member of the Republican Party and began his political career.

Ron Paul's career took a significant upturn when he won a seat in the US House of Representatives for Texas in 1976. He served multiple terms there. He’s also been a prolific writer. His first book Gold, Peace, and Prosperity: The Birth of a New Currency was published in 1981.  A year later, he released The Case for Gold: A minority report on the U.S. Gold Commission.

Throughout his political career, Ron Paull has been highly critical of the Federal Government’s economic policies. He has served as the Chairman of the CSE (Citizens for a Sound Economy) in 1984. He is also the founder of FREE( Foundation for Rational Economics and Education ).

Ron Paull won the 2008 Republican primary elections against Chris Peden by a considerable margin owing to massive public support, and he followed it with a better success rate in 2010. He retired from all forms of politics in 2013. Currently, he keeps himself occupied by publishing quality material on various economic and political issues.

For his work in the field of economics, Paul won the distinguished Lifetime Achievement Award from the Charity Awards Committee in 2010.

Ron Paul is married to Carol Wells – his high school sweetheart. They met in 1952 on Wells’ 16th birthday, and five years later, they married each other. They have five children – three sons Ronald, Robert & Randal and two daughters Lori and Joy. Carol is a writer who has published the Ron Paul Family Cookbook, and they remain happily married to each other. They have several grandchildren. Ron is also the subject of the movie Ron Paul Uprising.