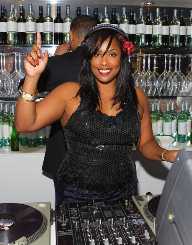 Deidra Muriel Roper or Deidra "Dee Dee" Roper was born in Brooklyn, New York City on the 3 August 1971. She was one of five children. She grew up in a household where her father was always playing music, and by 14, she had the ambition to be a DJ.

Deidra Muriel Roper emerged from New York’s early hip-hop scene when she began appearing as a DJ as a teenager. She used the handle Spinderella and in 1987, joined a hip-hop trio Salt N Pepa with Sandra Denton and Cheryl James. They found success in the late 1980s and their first hit was Push It. In 1994 won the trio won a Grammy Award. They released A Salt With A Deadly Pepa (1988) and released three more recordings before they disbanded in 2002.

Deidra Muriel Roper continues working and performing as a DJ. From 2003 until 2006, she hosted La, a radio programme. She has also appeared on reality television. She moved to Dallas, Texas in 2010 and is a member of the local DJ scene and has also worked in local radio.

Deidra Muriel Roper has one child, a daughter Christy (b.1992) whom she shares with NBA basketball player Kenny Anderson. Roper is involved with the American Diabetic Association as a volunteer.