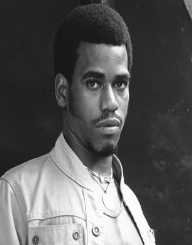 Hip-hop artist Kurtis Blow was born Curtis Walker in Harlem, New York on the 9 August 1959. From a young age, he was interested in music and becoming a DJ. He once said in an interview that he taught himself to read by looking at the music charts at the corner record store. From the age of 7, he was the family DJ, and by 13, he had his first paid DJ job. In his early teens he was a breakdancer and then in 1974, he started rapping. He would mimic radio DJs including Hank Spann of WWRL.

Kurtis Blow attended The City College, New York (1976-1980) as a communication major. During his time there, he was the programme director of the radio station. Originally his stage name was Kool DJ Kurt but this changed to Kurtis Blow during his college years. Blow began studying at Nyack College in 2006 where he majored in theology and minored in pastoral ministry. He became an ordained minister in 2009.

Kurtis Blow was working with Grandmaster Flash doing shows when spotted by JB Moore and Robert Ford, two writers from Billboard magazine who were doing a story on hip-hop. Blow appeared in their article and later, Moore and Ford wrote Blow’s first single, Christmas Rappin’. Blow was signed to Mercury Records in 1979, becoming the first Rapper to be approved by a major label.

He had hit with the single Christmas Rappin’, and the success of the single resulted in a recording contract with Mercury Records. His first album was Kurtis Blow (1980). A song from the album The Breaks was certified gold and established Blow’s reputation as a rapper.

Blow was in the documentary, Kings of Hip Hop: The Founders (2004). He was an associate producer on the documentary Slippin': Ten Years with the Bloods (2005) which was about gang violence. As an actor, he was in Old School (2015) and California Dreamers (2013). In 2014, he collaborated with the Christian hip-hop rock band Bride Dressed in Black.

Kurtis Blow is a co-founder of the Hip Hop Church where he serves as a minister, worship rapper and DJ. He is involved in the Hip Hop Church movement which operates on an international basis and has been an ordained minister since 2009.