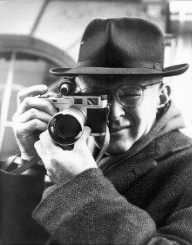 Henri Cartier-Bresson was a French Photographer, Filmmaker and founder of Photojournalism as an art. He was also the street photography pioneer and rated among best 20th-century artists in the world. His camera was always in his hand ready for action. He actively recorded the experiences he had during his participation in Spanish Civil War and the 1968 French uprisings. He developed his love of arts and literature while studying in Paris. He has been a great influence to many photographers with his work. During his career, he worked with great photographers like Robert Capa and David Seymour.

Henri Cartier-Bresson was born on August 22, 1908. His birthplace was Chanteloup in France. He was the eldest son born to a wealthy family. He had four siblings. His father worked as a textile manufacturer.  His mother came from a family of landowners and cotton merchants. His photography career began when he was a small boy. A proud owner of a Box Brownie, Henri would take snapshots during his school holidays.

Henri Cartier-Bresson began his early education in a Catholic school, École Fénelon. He then learned some music and later joined a painting class after his uncle Louis a great painter introduced him. Unfortunately, his uncle died in World War I which marked the end of his painting lessons.

In 1927 he continued his painting lessons at Lhote Academy. This was a studio owned by André Lhote, a skilled sculptor, and Cubist painter. He also studied contemporary art and classical artists.

In 1928 he joined the University of Cambridge to study art, literature, and English. He completed his studies in 1929 upon which he joined the French Army for mandatory services. He was stationed at Le Bourget.

Henri Cartier-Bresson began his career in Africa, particularly the former French colony Côte d’Ivoire. He used his portable camera to take as many photos possible, but only seven photographs managed to survive the harsh tropical weather. In late 1931 he went back to France. He took his career as a photographer more seriously after the influence of Martin Munkacsi, a renowned photographer.

Later in 1932, he placed his first photography work for exhibition in New York at the Julien Levy Gallery.  By 1935 he again exhibited more of his work at the same gallery. This was the work he did while sharing a studio with his fellow photographers Robert Capa and David Seymour

Upon his return to France, he acted Partie de champagne (1936) and La Règle du jeu (1939). These were films by the film director Jean Renoir. He covered the 1937 coronation of King George VI along together with Queen Elizabeth. His first photos were published following this event.  He was working with French weekly paper, Regards at the time.

In 1937 he was the photographer for “Ce Soir,” an evening paper for the French Communist till 1939. During the 1949 Civil War in China, he also covered the events of the war. When he retired from photography, he did some paintings and drawings and exhibited them in New York at the Carlton Gallery.

Henri Cartier-Bresson tied the knot with Ratna Mohini in 1937. She was a Javanese dancer. The couple divorced 30 years later. He then married Martine Franck and together they had a daughter namely Mélanie.

Henri Cartier-Bresson took his last breath August 3rd, 2004. He was 95 years old at the time of his death in France.