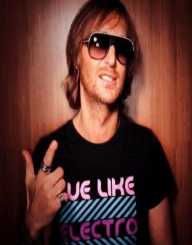 Pierre David Guetta was born on November 7, 1967, in Paris, France. His father was Moroccan Jewish, and his mother was of Belgian descent. He began his DJ career the Broad Club in Paris. In the beginning, he was playing pop songs, until he discovered house music. In 1987, he began hosting his club nights, playing house music. Three years later, Guetta released his first single in collaboration with French rapper Sidney Duteil.

In the early 1990s, Guetta continued to play in several clubs in Paris, including La Centrale, the Rex, and Folies Pigalle. In 1994, he released a single with house vocalist Robert Owens “Up & Away.” The single became a minor club hit. The same year, Guetta became the manager of Le Palace nightclub and also continued to play at other clubs, as well as organize parties.

In 2001, Guetta and Joachim Garround founded their production company Gum Production. The same year, he produced his first single with the company “Just A Little More Love,” featuring singer Chris Willis. The single was released the following year by Virgin records and became a major hit. The same year, he released three more follow-up singles. In 2003, Guetta created a compilation of his work in an album F*ck Me I’m Famous.

In 2004, Guetta released his second album, Guetta Blaster. The album featured singles like “Love Don’t Let Me Go” and “In Love With Myself.” Guetta released his third album Pop Life in 2007. The album sold more than 530,000 copies worldwide. Single “Love is Gone” peaked at number one on the American Dance Chart and was also on the Billboard Hot 100. Single “Delirious,” released in 2008, was a major hit worldwide. Guetta also released several remixes and video for the song. To promote his album, Guetta went to play in many countries. In 2009, Guetta was ranked No.3 in the Top 100 DJs poll by DJ Magazine and was elected the Best House DJ.

Although Guetta was already famous amongst house music fans, he gained worldwide recognition with his next album One Love. The single “When Love Takes Over,” which featured singer Kelly Rowland reached the first position in UK Singles Chart, as well as topped charts in many other countries. Other singles from the album, “One Love,” “Sexy Bitch” and “Memories” were also major hits. The album sold over three million copies worldwide. The album was nominated for a Grammy Award for Best Electronic/Dance Album, and his single with Kelly Rowland was nominated for two Grammy Awards.

In 2009, Guetta produced “I Gotta Feeling” for The Black Eyed Peas. The single topped charts in seventeen countries and became the U.S. most downloaded song of all time. For his work on the single and album The E.N.D., Guetta was nominated for two Grammy Awards. In 2011, Guetta released his fifth studio album Nothing but the Beat, which was followed by a re-release in 2012. In 2011, Guetta became the brand ambassador for Burn energy drink, which financed the feature-length documentary Nothing But The Beat. The film tells the story of Guetta’s rise to fame. In 2012, Guetta created the record label Jack Back Records, which focuses on electronic music releases.

Guetta continued his collaboration with many pop artists, including Rihanna, Britney Spears, and Lady Gaga. At the end of 2014, Guetta released his sixth studio album Listen. The album featured singe “What I Did for Love,” “Hey Mama,” featuring Nicki Minaj. The same year, he also embarked on a world tour to promote the album. In 2015, Guetta became the third artist to reach 2 billion streams on Spotify.

In 2016, Guetta became the music ambassador for UEFA Euro 2016 with the official song of the tournament “This One’s For You.”

As of 2015, it has been estimated by the Forbes magazine that Guetta’s annual income is 37 million dollars. In 1992, Guetta married club manager Catho Lobe. The couple had two children- son Tim Elvis and daughter Angie. After 22 years of marriage, the couple divorced in 2014.