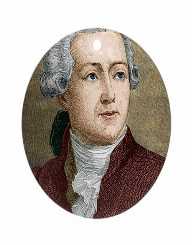 Antoine Lavoisier is a native of Paris and was born on the 26th day of August in 1743. His parents were of noble heritage and were considered to be well-off by the standard of living at the time. His primary education was completed at 'Collège des Quatre-Nations,' and he graduated in 1761.

His love for the metrological world was one that was influenced by his philosophy teacher at the time, Bbé Nicolas Louis de Lacaille. He had a natural affinity for chemistry, astronomy, botany, and mathematics. He, however, went further to study law and had the honors as a qualified lawyer in 1764, despite his love for the sciences.

Antoine Lavoisier had a recognizable affinity to leading scholars like Perre Macquer and Étienne Condillac. He went under the tutelage of Perre Macquer to learn geology circa 1763 to 1767. He served a term as an assistant to Perre during the Alsace-Lorraine territorial survey.

Antoine had his first work published in 1764, and this was a scientific paper that dealt with an identification of the properties of gypsum. This was later published and disseminated to members of the acclaimed French Academy of Sciences. This effectively kicked off his time as a notable scientist.

He was employed by the academy in 1768 as a member. He set out to work on the geological map for France. This was one of the earliest known efforts in that direction.

In the course of his scientific forays, Antoine Lavoisier was able to identify the resultant effects of the combustion of phosphorus. He was able to alienate the fact that air was needed in abundance for the process, leading to a boost in mass.

He went on to do the same alienation with sulphur, only to get a similar outcome. It was the earliest work in the field and was no doubt a pioneering endeavor. Later day researchers drew on his findings to further the body of work in this field.

His Work With Foreign Talents

Antoine Lavoisier evaluated other scientific works during the year to 1774 and Joseph Black was one of those he looked at closely. His resultant essay was titled Physical and Chemical Essays.

In reviewing Joseph Black’s work, he was zeroing in on the identification of alkalis, in their differing ramifications. Chief among Black’s pointers was that there was a presence of fixed air in mild alkalis. He further differentiated fixed air from the normal air as we know it. The fixed air was what became identified as carbon dioxide.

Lavoisier reached the conclusion that fixed air was what got emitted when charcoal is combusted with metals in the presence of controlled measures of oxygen. This is otherwise known as calcination.

In his 1774 work, Antoine Lavoisier surmised that alteration would happen in the state of any substance when subjected to a chemical reaction. This is irrespective of whether the substance is a solid, liquid or gaseous.

He also interacted with an English scientist during the same year, and his standpoint when liaising with Joseph Priestly was to explore Mercury. Priestly impressed on Lavoisier to examine the gas that is released when mercury is burnt.

Lavoisier's research proved to be of significance when he was commissioned by a team of scientists to enhance the qualitative state of gunpowder for the French army. This was in the year 1775. He went on to alienate oxygen in the decade to 1887 and gave it the name. He also successfully identified that sulfur was an element against the grain of the understanding of his day and age.

Antoine Lavoisier’s scholarly work also led to the discovery of hydrogen gas. Beyond this, he also espoused that it was possible that there are substances that had silicon properties.

Antoine Lavoisier is in no doubt recognized as a pioneer and member of the scientific quartet that pioneered the taxonomy of chemicals.

This was made possible in the year 1787, and the other names were Claude-Louis Berthollet, L. B. Guyton de Morveau, and Antoine François de Fourcroy

Antoine Lavoisier’s works were outstanding and caught the attention of the French government. This was the basis of his working in ammunition research for the French army. Antoine became the victim of a frame-up in the year 1794 and was indicted and killed. His purported offense was acting in concert with foreign scientists such as Joseph Louis Lagrange.

His wealth of contribution to the French state during the well-documented reign of terror in France during the 18th century notwithstanding, he was not spared. He was convicted along with 28 other people during the reign of Maximilien de Robespierre.

Despite losing his life in such ignominious circumstances, Antoine Lavoisier is highly regarded globally for his body of work in the field of chemistry.

Benjamin Franklin was one of the leaders of note that was an ally of Antoine Lavoisier. He named the periodic table elements of hydrogen, sulfur, and oxygen.

Antoine’s body was only unearthed and exhumed after a long year following his execution and handed over to his widow. This was after the ruling class identified that he was wrongly executed. Streets, buildings, schools and other monuments have been named after him.

The American Chemical Society recognized his works as one of the most important contributions to research and theories in the physical sciences.

Antoine Lavoisier got married to Marie Anne Paulze in the year 1771. His wife was also an intelligent lady who served as his assistant during experiments and their subsequent publications.