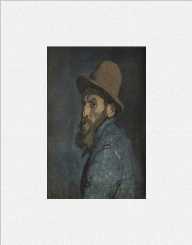 Louis Anquetin was a painter, famous for his paintings with cloisonnism method.

Louis Anquetin was born on 26 of January 1861 in Étrépagny. Étrépagny was a commune in Eure Department, situated in the Haute-Normandie region of France. He was the only child to butcher George Anquetin and Rose-Felicite Chauvet. He was encouraged to take up drawing by his supportive parent. Louis soon fell in love with art and began his education.

Louis Anquetin attended the Lycée Pierre Corneille in Rouen in 1872. The eleven-year-old met Edouard Dujardin there. After eight years, Louis Anquetin graduated in 1880, going on to serve in the 6th Cavalry Regiment of Dragoons, stationed in Chartres for two years.

After his stint in the military, Louis went to Paris with the blessings of his parents in 1882. There, he joined Léon Bonnat. Louis worked in the studio until Léon became a Professor at the École des Beaux-Arts, the Academy of Arts. Louis and his friend Henri de Toulouse-Lautrec moved onto the workshop of Fernand Cormon, named Atelier Cormon, in 1884. It was in Atelier Cormon where he met artists such as John Paul Russell, Émile Bernard and Vincent van Gogh, all whom later would become famous painters. The artist would frequently use one another as models; he drew his friend Henri in 1886. In 1887, Louis did pastel study and developed a new method with friend Émile Bernard. The method was coined as cloisonnism by critic Edouard Dujardin. The style was inspired by both stained glass and ukiyo-e from Japanese styles, and it was exhibited in L’Avenue de Clichy: Five O’ clock and Le Faucher.

In 1888, Louis Anquetin exhibited his work in the exhibition of Les XX in Brussels and at the Salon des Indépendents in Paris. Louis Anquetin works showed up at the Fourth Paris International Exposition of 1889, which made him financially comfortable, enabling him to move to Rue de Rome from Montmartre. He continued to produce paintings, focusing on new styles and pastels. After his successful show in 1891, Louis Anquetin traveled to Belgium and Holland with friend Henri de Toulouse-Lautrec in 1894. After seeing works of Peter Paul Rubens and Rembrandt van Rijn, Louis switched styles to classical art and took up oil painting. Following that, he was abandoned by his friends, only Henri and Émile Bernard remained.

Louis studied anatomy for two years under Professor Arroux, an anatomist who lived in Clamart. After that, he fell from the public eye, since he had abandoned modern movements. In 1901, Louis Anquetin was commissioned by Fernand Cormon to paint murals at the Hôtel de Ville in Tours together. He also wrote a book about Rubens, focusing on painting and styles, it was published in 1924. Louis later owned a studio to give lectures and continued to paint.

Louis Anquetin married widow Berthe Coquinot in 1906; he was forty- five. They lived in Rue Des Vignes in the 16th arrondissement and had no children. Louis Anquetin died in Paris on 19 August 1932