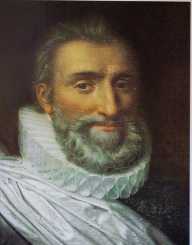 Henry IV was the King of France from 1589 to 1610 and is best known for ending the Wars of Religion that had dogged France for decades.

Henry was born in Pau in the Kingdom of Navarre, which is in modern-day France. His mother was Queen Joan III and Antoine de Bourbon the Duke of Vendome. Henry fought on the side of the Huguenots during the Wars of Religion and became the King of Navarre after his mother’s death. Henry then married the daughter of the King of France Henry II and Catherine de Medici Margaret Valois. The marriage to place on 18 August 1572 in Paris. On 24 August the St Bartholomew’s Day Massacre erupted as Catholics slaughtered Protestants in Paris and across France. Many of the Protestants in Paris had arrived to attend Henry’s wedding. Henry survived but was kept under house arrest in Paris until his escape in 1575.

France had been torn apart by the Reformation with huge numbers of the country converting to the various sects of Protestantism. Henry had been baptized a Catholic but raised Calvinist and made Calvinism the state religion of Navarre. During the St Bartholomew’s Day Massacre he declared his allegiance to Catholicism but joined the Protestant forces following his escape from Paris. In 1584, Henry became the heir apparent to the French throne; this was disputed though as he was a Protestant. The dispute over the throne sparked what was known as the War of The Three Henrys, which was a part of the wider Wars of Religion. The war saw Henry lead Protestant forces against Henry III the King of France and Henry Duke of Guise, the leader of the Catholic League which sought the eradication of Protestantism. Henry III had the Duke of Guise murdered hoping to take control of the Catholic League. Instead, the King faced rebellion across France. Henry III declared Henry of Navarre a legitimate Frenchman and heir.

Henry then joined Henry III and marched together against the Catholic League. Despite some victories and the League being leaderless, the two Henrys were unable to take Paris. Henry III was murdered by a Catholic monk in 1589 and Henry had himself crowned Henry IV the King of France. After taking the crown, Henry renounced Protestantism and embraced Catholicism again. This won him the support of war-weary Catholic nobles and the city of Paris. Henry annulled his marriage to Margaret in 1599 as she had failed to produce an heir and married Marie de Medici.

Rule As King Of France

Henry brought an end to the Wars of Religion and announced the Edict of Nantes which ended discrimination against Protestants and restored their civil rights. Henry also undertook a great campaign of public works building. Henry had roads, bridges, and canals constructed. Forests were restored, and swamps drained. Henry also sought to create a more centralized economy and to improve agriculture and taxation. Henry also commissioned French expeditions to the New World and laid claim to Canada.

Henry also founded the French East India Company to pursue French interests in the Indian Ocean and Asia. Henry continues the French rivalry with the Habsburgs of Spain and the Holy Roman Empire. The Habsburgs had supported the Catholic League and invaded France during the War of the Three Henrys. Despite this Henry operated mostly through diplomatic means to extend French influence rather than engage in further exhausting conflict. He was able to extend French influence in Savoy and Italy.

Henry also strived to improve the lives of his subjects and is said to have coined the phrase ‘a chicken in every pot’ about increasing the living standard of the peasantry. Henry brought peace and prosperity to France and was well received by his subjects and earned the nickname ‘Good King Henry.’ Despite his popularity, Henry was the subject of three assassination attempts. The first came in 1593 and the second in 1594. In 1610, while the royal carriage was stopped in traffic in Paris, Henry was stabbed to death by a Catholic fanatic Francois Ravaillac.

Henry’s first marriage to Margaret Valois in 1572 produced no children. The couple mainly lived apart as Margaret remained with the royal court in Paris while Henry fought in the Wars of Religion. The marriage was annulled in 1599. Henry then married Marie de Medici in 1600. Together the couple had six children. Marie would serve as Queen Regent following Henry’s death, and their son became Louis XIII and King of France upon coming of age. Henry also had some illegitimate children. One mistress, Gabrielle d'Estrées, bore Henry three children. Henry was the first French king from the Borbon line that would rule the country until the Revolution in 1789.