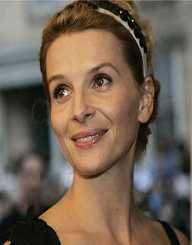 Paris-born Juliette Binoche made her first appearance in the film industry in 1983. Five years later, she featured in The Unbearable Lightness of Being which marked her career breakthrough as she gained national recognition as a result. She continued to succeed in her film career landing herself an Academy Award in 1997. Her role as Hana in the film The English Patient brought her several awards including the Academy Award.

Juliette Binoche was born on March 9th, in 1964. She was born in Paris, France. She is the daughter of Monique Yvette Staelens, who works as an actor, teacher, and an actress. Her father, Jean-Marie Binoche was a sculptor, director and an actor too. Her youth stage was coupled with several hardships that faced her family. When she was still young, her parents divorced. In school, Binoche was not good in academics, and she struggled a lot to succeed. With the knowledge that she was not good in school, Binoche thought it was wise to try out her luck in the theatres. During this time, she was in her teens when she took this seriously and moved to Paris with her sister. Her she rented a house where she would support herself and also help her sister. Fortunately, she was lucky enough as she starred in several stage performances of productions such as Pirandello.

While still in Paris, Binoche later enrolled with French National Academy of Dramatic Arts. Sadly, she did not take time here as she grew frustrated with the way other students were not committed to studying. Nevertheless, she kept on fighting for her dreams of one day becoming a movie star.

Binoche acting talent was evident during her training at the National Academy. This contributed to numerous offers that followed requesting her to feature in movies that were lined up. Seeing this, Binoche left school with the aim of making her acting dreams come true. Sooner or later, the debut film was out. She had not clocked twenty when this happened. Binoche played the lead role in Liberty Belle-1983. She only needed to be present for the movie screening for only two days in her role in this film. In spite of this, her first appearance in the film industry was a step ahead in her career.

A few years later, Binoche continued to succeed after featuring in films such as Hail Mary¬-1985 and Rendez-vous which also released the same year. Three years later in 1988, she played the lead role in the American movie, The Unbearable Lightness of Being. This was the film that earned her nationwide popularity. With the fame that she had acquired to this point, Binoche was considered for several high budget films in the United States. Some of the films that she was requested to feature in included Mission: Impossible and Jurassic Park. Surprisingly, she declined such esteemed offers and opted to work on her film career more so in French films.

Later on, Binoche went on to appear in a low budget film in 1991 called The Lovers on the Bridge. A year later she bagged home a Caesar award for her role as Anna Barton in the movie Damage-1992. Her next role was in the movie series Three Colors -1993 which she reprised her role in 1994 and 1995. This movie earned her the Best Actress trophy in the role she played in 1993.

Her success in the film industry was not yet over as Binoche soared new heights in her acting career after the release of the hit film The English Patient in 1996. This movie was one of her best acts during her acting career. It went to win 9 Academy Awards. Binoche took home an Oscar award under the category of Best Supporting Actress.

Her professional career greatly influenced Juliette Binoche's own life. A number of the relationships she entered into were with her workmates in the film industry. In spite of this, she has not yet tied a knot with anyone. However, Binoche has two sons from her previous relationships. Her relationship with Andre Halle, a scuba diver, gave her a son named Raphael. She also dated Benoît Magimel who gave her the second child, Hana.