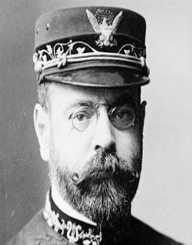 John Philip Sousa was born on 6 November 1854 in Washington DC. His parents were of mixed descent, with his father of Spanish and Portuguese origin and his mother with German roots.

John Philip Sousa was one of ten children, somewhat typical at the time. Despite this his parents afforded to send him for music education at a very young age; his father was a trombone player with the US Marines and wanted to encourage his children along with his interests. For this reason, Sousa started attending music lessons at the age of six.

His instructors found him to be bright and a natural talent. Amongst other skills, for example, he had perfect pitch which allowed him to name musical notes when he heard them, like telling colors apart by sight.

John Philip Sousa studied a variety of instruments (mostly wind instruments, but also violin and piano) alongside music theory. At the age of thirteen, he asked his father for permission to join a circus band but met with refusal.

His father enrolled him instead in the Marine Corps to keep him out of harm’s way.


Music and the Army

At his father’s insistence, John Philip Sousa accepted and joined the Marines as an ‘apprentice musician.’ He stayed from the age of thirteen to twenty, growing up in strict discipline, but also enjoying the camaraderie between soldiers and becoming exposed to military marches, which would later have a great impact on his life. At twenty Sousa left the army for a while.

John Philip Sousa found work in a theater, where he developed his skills as a conductor for the first time. Having gained experience (and a wife - he married Jane van Middlesworth Bellis in 1879), Sousa returned to the Marines in 1880. Here he was appointed Head of the Marine Band in Washington DC.

In the world of military music, thus, Sousa had already found great success. He would lead the band for twelve years. During that time his band became quite renowned as the foremost military band in the country. His band played at the inauguration of two US Presidents. Sousa also found time for his projects, however.

John Philip Sousa wrote marching band music himself, drawing on the music theory he'd learned as a child. Among his compositions was ‘Semper Fidelis,’ a rousing piece of music that became the Marines’ official march. Sousa also helped in the development of a new tuba-like instrument. The sousaphone, as it came to be known, remained his preferred instrument of choice for the rest of his life.

In 1892, John Philip Sousa left the Marines once and for all. He bore no ill will to it but wanted to start something new of his own. The John Philip Sousa  Band was born. The handpicked outfit performed concert after concert, lasting until 1931 and delighting audiences around the world.

Some of these performances are hard to imagine even today. Sousa’s band, for example, played at the 1900 World Exposition in Paris, at the time the most important celebration of globalization ever staged. They also had the honor of marching through the Arc de Triomphe in Paris.

John Philip Sousa's most lasting achievement came in 1896, a few years into his career as a civilian musician. The ‘Stars and Stripes Forever’ quickly became Sousa's most popular composition. Years after Sousa's death, through cinema and newsreels, the piece of music became widely known throughout the world. The march took on such a life of its own that Congress adopted it as the US official march in 1987.

In his later years, John Philip Sousa tried to give back. After serving briefly as a conductor in the First World War (retiring in 1918 after it ended), Sousa insisted on donating almost all his salary to a fund for retired Marines. He would also encourage younger musicians wherever he could. When he passed away on March 6, 1932, the legacy he had left on military music was immense. No one has surpassed it since.