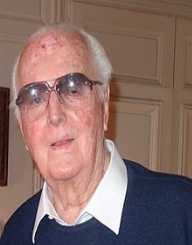 Count Hubert James Marcel Taffin de Givenchy was a French fashion designer known for his stylish designs. Born on February 21, 1927, he founded the House of Givenchy in 1952. Givenchy gained fame as the designer of Audrey Hepburn and Jacqueline Bouvier Kennedy.

Hubert de Givenchy was born on February 21, 1927, in Beauvais, Oise to an aristocratic and Protestant family. He was born to Lucien Taffin de Givenchy (Marquis of Givenchy), and Béatrice ("Sissi") Badin. He was the last child of his parents, and his elder brother was Jean-Claude de Givenchy, who became the president of Parfums Givenchy.

After the death of Lucian in 1930, Hubert de Givenchy was brought up by his mother and maternal grandmother, Marguerite Dieterle Badin. Givenchy who was from a family with an artistic background. His maternal grandfather Jules Dieterle was a set designer and made designs for Elysee Palace and the Beauvais factory.

At the age of seventeen, Hubert de Givenchy moved to Paris to study at the Ecole Nationale Superieure des Beaux-Arts. He had previously considered a law career but had a change of mind to pursue a career in the fashion world.

Working with other designers for some years, Hubert De Givenchy opened his design house the Plaine Monceau in Paris. His first collections including separates like a long skirt and simple tops were highly patronized.

He later retained this collection after the Paris model Bettina Graziani. His designs unlike the conservative designs by Dior came with innovations and elegance. Despite using cheap fabrics due to financial reasons, his designs were attractive and quickly caught the eye.

Works for Actress Audrey Hepburn and others

Hubert de Givenchy designed the clothing for many celebrities including actress Audrey Hepburn. The two first met in 1953 at the shoot of the film Sabrina, and the two continued to have a close working relationship.

His designs for Hepburn included her attire in Funny Face, 1957 and the black dress she wore in Breakfast at Tiffany’s in 1961. He also took charge of the attire she wore for films like Love in the Afternoon (1957), Charade (1963), Paris When It Sizzles (1964) and How to Steal a Million (1966). Givenchy also came up with a brand of perfume collection inspired by Hepburn and called L’Interdit and Le de Givenchy. Hepburn became the face of the fragrance, making it the first time a celebrity became the face of a fragrance ad campaign.

Hubert de Givenchy's collection Pret-a-porter made its debut in 1954 and followed it with the 'Balloon coat' and the 'Baby Doll' dress in 1958. Working primarily on women’s wear, Givenchy created a men’s line in 1968.

He organized a retrospective of his designs at the Beverly Wilshire Hotel in Beverly Hills, California. In 1981, Veuve Clicquot acquired the perfume line of the House of Givenchy, while Louis Vuitton Moët Hennessey (LVMH) also bought the fashion line in 1989.

After selling his business off, Hubert de Givenchy said goodbye to the fashion world, in 1995. John Galliano succeeded him as the head designer. Givenchy later focused on collecting 17th and 18th-century bronze and marble sculptures.

He lived at the Chateau du Jonchet in Romilly-sure-Aigre, Eure-et-Loir near Paris. He organized a private exhibition at Christie’s in Paris during the Biennale des Antiquairesfrom 8 to 14 September 2014.

The exhibition also featured artworks by Jean-Baptiste-Claude Odiot. Hubert de Givenchy died at age 91 on March 10, 2018, in his sleep. He is buried in Passy Cemetery in Paris.