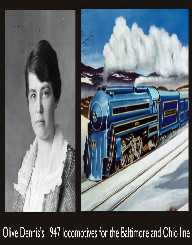 As a teenager, Olive Dennis attended Western High School. After graduating from this school, she went on to attend Goucher College. She earned a bachelor’s degree from this school in 1908. She then enrolled at Columbia University. Here, she earned a master’s degree in both astronomy and mathematics.

After earning her master’s degree, she worked for about a decade before returning to continue her education. This time she enrolled at the University of Wisconsin, and she later transferred to Cornell University in 1920. Here, she graduated with a degree in civil engineering.

After earning her master’s degree, Olive Dennis spent about a decade working as a teacher. She later left this job to continue her education.

Olive Dennis returned to the workforce after she earned her civil engineering degree. During this time, it was extremely hard for Dennis to get a job, mostly in part because she was a woman. Luckily, she eventually found work with the Baltimore and Ohio Railroad company as a draftswoman. While working here, she designed bridges.

In 1921, Olive Dennis was promoted within the railroad company to work as a service engineer. Ths meant that she was in charge of solving the many problems that passengers often faced while riding the railroad. Many of these jobs she had to do in this position involved making riding on the train more comfortable for passengers. Ironically enough, even though it was hard for her to work as an engineer because she was a woman, she earned his promotion in part because she was a woman, and the railroad owners figured that she would be able to solve the problems that women passengers were facing on their trains.

One of her major contributions to the railroad industry was her invention of the Dennis Ventilatory. This was more or less a type of air conditioner for trains that would allow trains to cool down without making passengers deal with an uncomfortable draft. (This air conditioning system would later be used in other trains and would be used as inspiration for other types of air conditioners.) Olive Dennis also invented a type of stain-resistant material for the train seats.  She also provided passengers with better seating, less irritating lighting, and easy-to-understand schedules. Her improvements in passenger comfort on trains made the transportation industry more competitive. Buses and other trains tried to match her achievements. Because of her, many different types of public transportation became more comfortable.

During World War II, Olive Dennis also began working for the Federal Office of Defense Transportation for the United States. She did this until the end of the war.

After the war, Olive Dennis continued to work on railroads until she retired in 1951.

She was a member of the American Railway Engineering Association. She was the first woman to join this association.

Olive Dennis died on November 5, 1957, in Baltimore, Maryland, USA. She was 71 years old when she passed away.