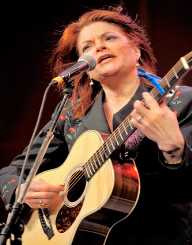 The daughter of the popular and famous country musician Johnny Cash, Roseanne Cash was born on the 24th of May 1955. Roseanne growing up followed up in her father’s musical calls and became yet another great singer from the Cash’s family. She was in Germany in 1973 on tour with her dad during her younger years after completing high school.

The album which she released during the tour was not a success. However, it showed great promise in her talent as a singer. Following the release of the album, Roseanne Cash landed her first contract with Columbia records. In addition to her first album, she released another album, Right or Wrong, with Columbia Records in 1980. It took the music industry by a storm.

In the year 1981, Roseanne Cash released a new album following her success of the previous one. The album featured a single hit song. After releasing many more albums, she won her first Grammy Award in 1985.

Roseanne Cash was born to the legendary country musician Johnny Cash and his wife Vivian Liberto in Memphis Tennessee on 24th 1955. She is the eldest child of the four children. The family moved to California in the year 1958 when her father was doing well in the music industry.

The year 1996 saw the divorce of her parents, and they moved in with their mother in California but Ventura. She vowed to be a great musician someday despite her parent’s divorce because she had fallen in love with music. So, to sharpen her singing skills she decided to follow her father to Germany in 1973 as a backup singer and his wardrobe assistant.

Roseanne Cash attended St. Bonaventure High School where she graduated in 1973. She took a little time off to go on the road with her father to kick-start her singing career. However, after taking almost three years with her father in Europe, she decided to take up work at CBS records in England.

A year later she went back home and joined the Vanderbilt University in Nashville. However, she decided to drop out one year into the program. She chose of attending the Lee Strasberg Theatre Institute in California to study method acting. She again decided to take a break from school in the year 1978 to try and go for music big time. As a result, this move saw her at the doorsteps of producer Rodney Crowell.

Roseanne Cash has had a thriving career in the music industry. In 1979, while playing with The Cherry Bombs, she recorded the Album Right or Wrong which did astonishingly well in the markets. Her pregnancy barred her from touring to promote it.

She made it to the studios and continued recording despite her pregnancy. The year 1981 saw them move to California from Germany to work on the album Seven Year Ache. The album brought the award of Grammy Award gold. Besides, the record managed a single hit that was number one on the Billboard Pop Charts.

The two lovebirds went ahead and recorded a new song, a duet; It’s Such a Small World. The song was good. It clinched the top position in the Billboard country chart category. This resulted in her being named the top artist of the year in 1988.

Soon after, Roseanne Cash continued to do well in the music industry catching the eyes of Columbia records. They signed her, and in 1989 she released many albums with them. She managed to gain her fifth Grammy award with them for her song Black and White, cementing her prowess in the Music Industry.

The year 1979 saw the union in holy matrimony of Roseanne Cash and country musician Rodney Crowell in 1979. Their union bore them three daughters. Apart from her drug problems, she struggled to keep up her personal and professional life, but it failed. Roseanne and Crowell got divorced in 1992 prompting her relocation to Manhattan.

She got married again in 1995 to another producer by the name John Leventhal. They are living in Chelsea with their two children Jakob and a girl.